P Is for Prince Street 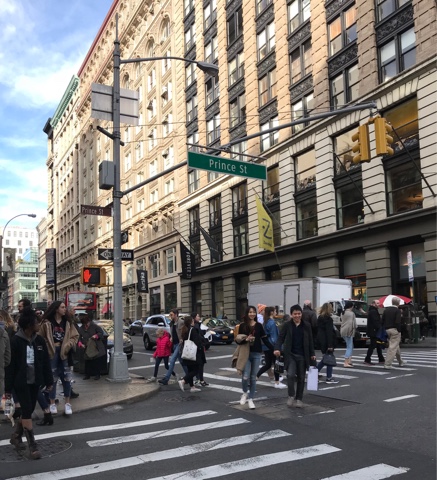 After a few days hiatus it's time for our next subway adventure for the A to Z Blogging Challenge. The Challenge has moved on to "X," but we're still chugging along, albeit with "P." We're off to one of the most fashionable areas in Manhattan, Soho. Soho is the description for the area south of Houston (Street). It goes from Houston Street to Canal Street, where Tribeca -- triangle below Canal (Street) begins. That may be somewhat confusing, so I'm including a portion of the subway map to help out. 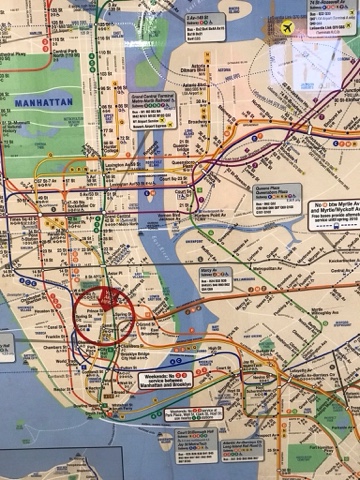 The Prince Street subway stop is in the red circle on the map. The large green rectangle in the center of the map of Manhattan is Central Park and today's featured subway station is approximately three miles south of the southern edge of Central Park. Manhattan is on the left of the map and on the right, across the East River are Queens and Brooklyn. 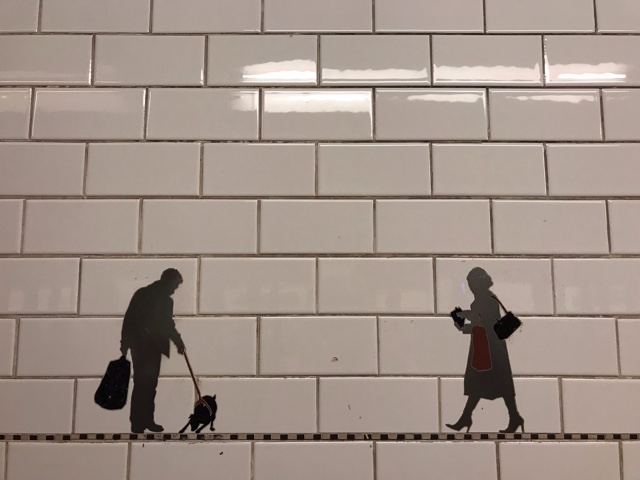 The subway mural at Prince Street was a discovery for me. It's entitled "Carrying On," by Janet Zweig in collaboration with Edward del Rosario. There are 194 figures, all carrying something. The figures are small and there is no vibrant color, but I found them captivating. In a city of walkers and subway riders, we are all often carrying much of our daily lives with us.
﻿ 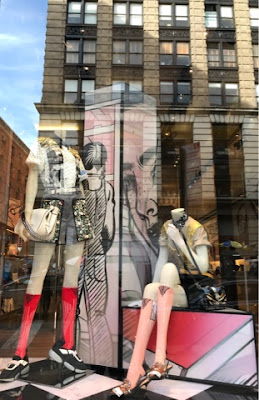 P is also for Prada
Soho has some very elegant shopping and I had a great time window shopping during my visit. I especially enjoyed the window at Prada, with the Pop Art and the reflection of the classic Cast Iron building. The ornate facades were characteristic of Soho's grandeur in the later half of the Nineteenth Century. Fortunately many of them have been preserved after a long era when the neighborhood was in decline.    ﻿

Our next stop is back uptown. We're visiting my favorite subway murals. It's a difficult choice, but this next set have a place in my heart. I discovered them as well, during my subway station visits for the A to Z Challenge. I'm excited to share them with you.
As ever, thanks for visiting and hope you enjoy a bright and sunny spring Friday.
Posted by Buttercup at 9:49 PM

That is really cool about the mural with people carrying things. I love stuff like that.

I don't think I've been to Prince Street. What a fun set of murals.

I love the theme Carrying On. I often say to keep on keeping on and that reminds me of that. Nice to see so much history has been preserved there. I'm going to miss these entries when they are done.

Carol, I would love to see more of the characters carrying things. So interesting. The Prada store makes me think of the time when I was in NYC...I went into the Michael Kors' store at 610, Fifth Ave. at Rockefeller Center...I went in and right back out ...just so I could say I had been there..There's no way I could have shopped. :) Blessings, xoxo, Susie

I bet there is a street in NYC for every letter of the alphabet!

I'm glad you're still carrying on Carol too with the A to Z challenge, like you I'm a little behind but still hanging on in there! I'm pleased you included the map, I have no idea whether we went to Princes street on our last NY visit but I would have liked to see the mural for sure!
Wren x

Great post! I like the figurines on the mosaic :-)
Are you still doign the challenge? I see you didn't get at the end in april, but are you still going trhough the alphabet? It would be a shame if you didnt' finish the series.