O Is for One Hundred and Third Street 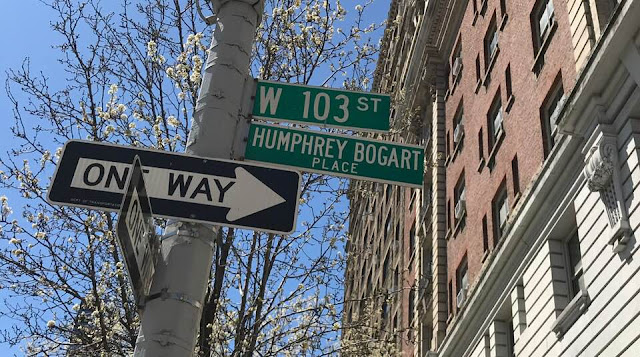 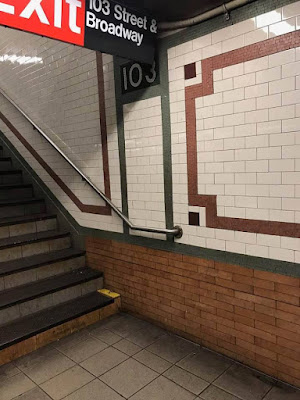 Our A to Z Blogging Challenge journey has taken us to West 103rd Street on the #1 line for our O post. This is one of the original lines of the subway system and two stops north of my "home" stop at West 86th Street. This station is a local stop and has a traditional tile pattern. If anyone has redone a bathroom or kitchen you may have chosen "subway tile" like the tile at 103rd Street.
I chose 103rd Street because I knew Humphrey Bogart grew up here and I was familiar with the street sign. The house Humphrey Bogart grew up in is just a few doors down the street to the right. He was born here in 1899 and lived here until July, 1918 when he left to serve in the Navy. 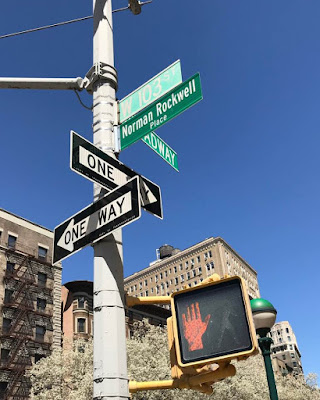 On the other side of Broadway West 103rd Street is Norman Rockwell Place
When I came out of the subway on the north side of Broadway the street sign above caught my eye. I knew about Humphrey Bogart's connection to the neighborhood, but  I had no idea that Norman Rockwell had any connection as well. In 1894 Norman Rockwell was born in New York City and lived on West 103rd Street.
The story of the street sign was new to me, too. A group of students from Edward A. Reynolds West Side High School -- around the corner from Rockwell's home -- had visited the Norman Rockwell Museum in Stockbridge in 2014. When they came back to New York they looked for a sign marking Rockwell's years here and found nothing. They formed a committee, obtained signatures and created pamphlets and posters to educate the community. Finally, in 2016 the City Council approved Norman Rockwell Place. 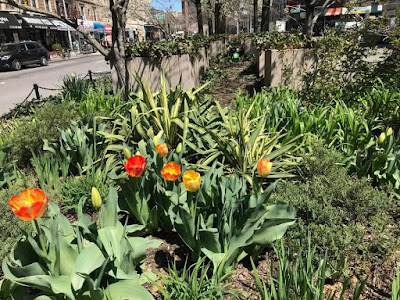 I can't resist a tulip picture.
This was taken in the island that runs down the center of Broadway above 72nd Street. I'm standing between Humphrey Bogart Place and Norman Rockwell Place.
We're leaving the Upper West Side for our visit to our "P" destination. We'll have a fun mural and a very hip neighborhood. I hope you'll join me.
As ever, thanks for visiting and wishes for a great week.    ﻿
﻿
Posted by Buttercup at 10:30 PM

bogart and rockwell. so rich in history there. i like that tile too.

Our tulips are now in bloom too! Love hearing the history and the stories.

I am happy to read about the activism of these young people in educating the public about Norman Rockwell and his roots in NY.

So nice to see those tulips and also to learn a little of Bogart and Rockwell too. Two men who are well remembered by many but in different ways. Will be interesting to see where the next stop takes you !

Carol, I love it all...the tiles,the designs, the steps. All the confusing ,at times, street signs. LOL. Love it. Blessings, xoxo, Susie

I adore old Humprey Bogart movies! Of course, Casablanca is his most famous movie but I've watched all the ones he starred in. I did not know Norman Rockwell once lived in Manhattan. I also a fan of his art.

Hello!!! Thank you for visiting me! I hopped right over to meet you and see that we have some of the very same sweet friends! I am your newest follower and am so looking forward to getting to know you!!

Dear Carol, Tuesday is when I usually stop by your blog. During April I've got to visit with you and learn about subway stops. It's been so interesting. And I enjoyed learning about both Bogart and Rockwell's connection with this street. Thanks. Peace.