It's Time for Iris and a Giveaway 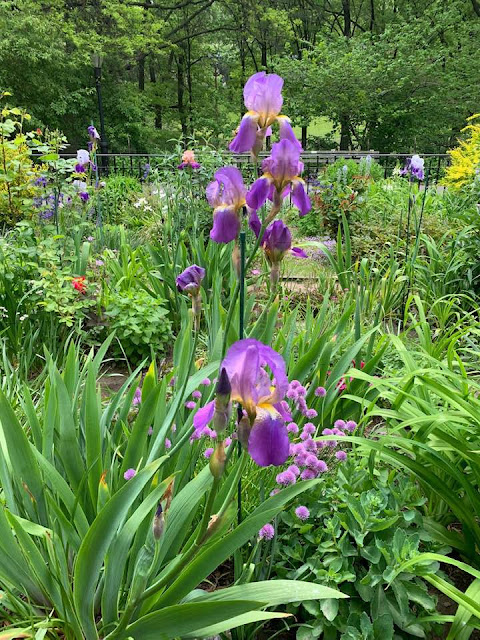 It's time for Iris
With every new blooming flower of the season I think "This is my favorite." My favorite really is the lilac, but I'm partial to just about every other beautiful bloom I see. I've been delighted with the first crocus of the season and then the tulips, and now it's iris. I found these beauties in Riverside Park today and they are my new favorites. I know that soon the iris will be gone for this season and I'm going to enjoy them as long as they last. But I need to remember it's still early in the year for flowers and there are lots more to come. 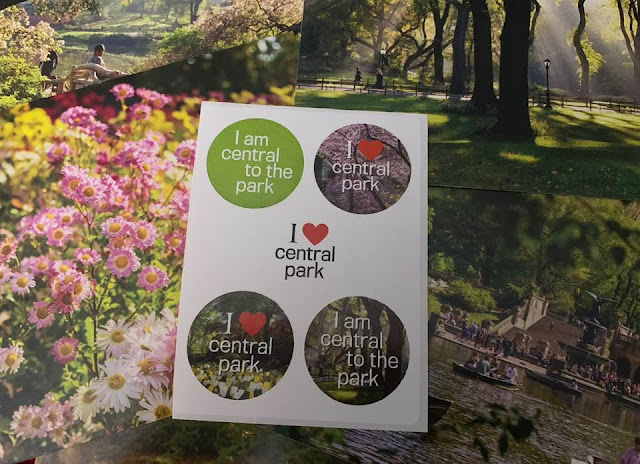 It's also time for a giveaway
I haven't done a giveaway in ages -- or maybe just in 2020 -- but I have a set of note cards and stickers with pictures of Central Park that I would like to share. The "rules" are easy peasey. Please leave a comment with your favorite spring flower and be a follower of Buttercupland by 11:59 p.m. on Saturday May 30. I'll be posting the winner on Sunday, May 31.
What are your plans for Memorial Day? We're still in the stay at home mode so I'm sticking (as usual) close to home. The weather looks nice and I plan to visit Riverside Park and do some walking. I also plan to blog and be part of my Monday afternoon Zoom with friends.
As ever, thanks for visiting and take good care. Much love and wash your hands.
Posted by Buttercup at 8:58 PM 11 comments: Links to this post

Pink Saturday And a Box of Colored Chalk

Fortunately, Pink Saturday is a state of mind and not a place, because today was not a day for sunshine, park and chalk. It was rainy and windy and a good day to stay inside -- even more than the usual stay at home. I got outside for a quick errand and a mile walk, but otherwise I've been indoors spending time phone and text chatting and reading the New York Times Sunday sections that arrive on Saturday.
For anyone who thought children had stopped playing outside, think again. That may have been the case in the past, but now there are children playing in the park, on the sidewalks and in the closed streets. We've all had our fill of television and electronic devices and long for sunshine and activity. All we want now is to be outside! 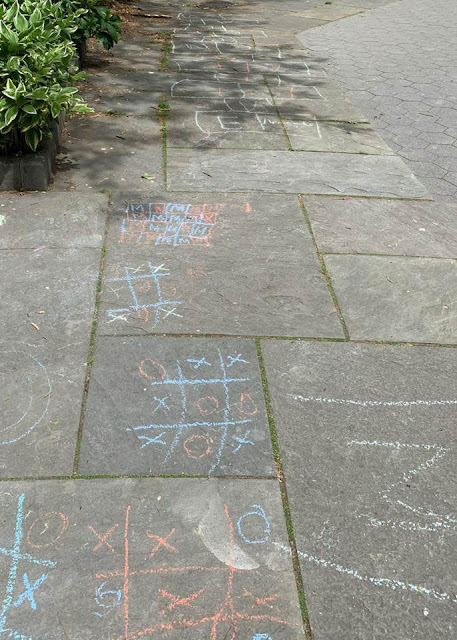 What's your pick? Tic-Tac-Toe or Hopscotch?
I don't think I've seen tic-tac-toe or hopscotch on the streets of New York in decades, but there many games drawn throughout the park. When I was growing up we played hopscotch almost every summer day, and I was pretty sure that the game was history, but clearly there's been a resurgence. Who else in Buttercupland was a hopscotch player? 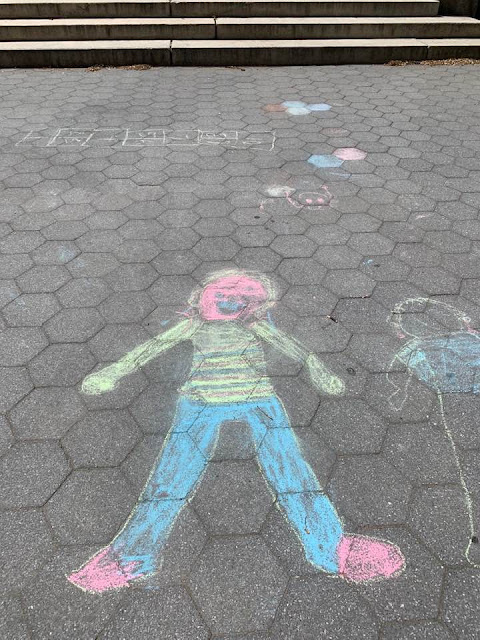 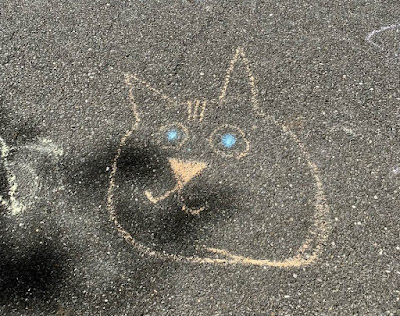 Enjoyed finding this smiling cat on one of my walks
It feels great to be blogging, pictures and all. I always enjoy the comments -- don't we all -- but especially enjoyed the ones from yesterday's post and all the book comments. I hope everyone found a recommendation or two. I know I did.
Before my photo difficulties I mentioned doing a giveaway and I will go ahead with it tomorrow. Please stop by!
As ever, thanks for visiting and take good care. Wishes for a very happy Memorial Day weekend.
Posted by Buttercup at 8:37 PM 9 comments: Links to this post 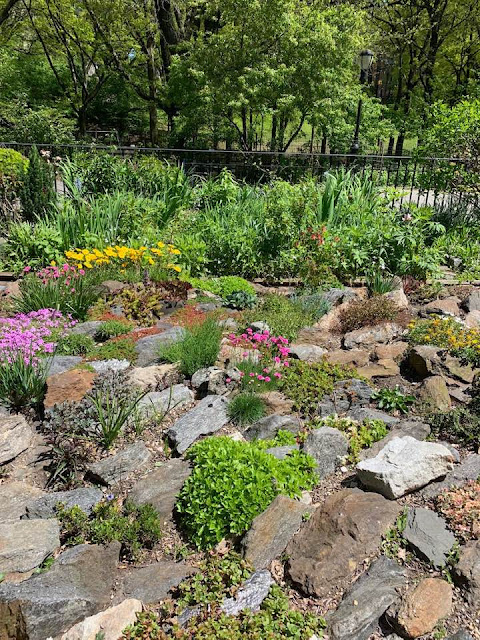 1) I had a great morning walking with one of my gym/Yoga/water aerobics friends in Riverside Park. We met in the morning when the park wasn't crowded and enjoyed sunshine, walking and catching up on the last two months. We have "seen" each other via Zoom, but there's nothing like fact to face, even with masks and at opposite ends of a park bench.
2) I figured out what I'd been doing incorrectly in downloading photographs. Not sure what happened because it's the same thing I've been doing for years, but somehow I omitted one step and of course, nothing happened. Once I walked through the process again -- after looking at my settings for an hour -- all was right with the world.
3) 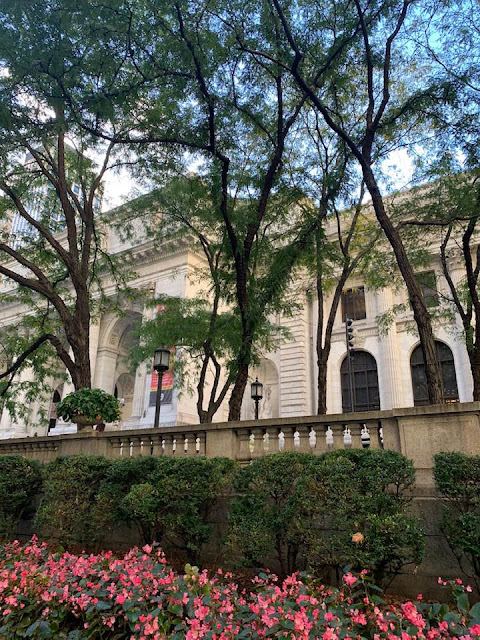 Tomorrow, May 23, is the official birthday of the New York Public Library.
Happy birthday, my dear friend! I can't wait to spend time with you again.
4) My concentration has improved a lot and I'm back to reading. One of the books I'm looking forward to reading is The Spiral Shell by Sandell Morse. I discovered Sandell and this book this via a writer friend and it looks thoughtful and totally compelling. I've been reading a lot of history, and looking at difficult times past and what kept people going. There are several author "Zooms" that are scheduled -- in the link -- and I hope to "see" you at one of them. 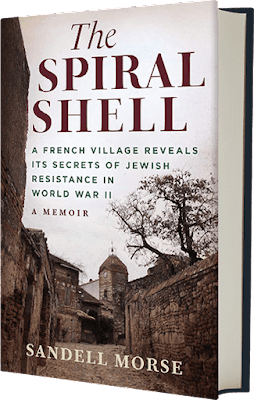 5) A question for Buttercupland: What are your reading choices this month. Besides history, I'm reading mysteries as always, and thanks to the New York Public Library, I'm on my third volume of C.S. Harris' Lord Devlin historical mysteries. Set in the Regency period in England, they chronicle Sebastian St. Cyr, Viscount Devlin, as he steps beyond his life in the aristocracy and seeks justice for complex and unsolved murders. They're far from cozy and at times, a little more gruesome than I would choose, but the characters, setting and historical detail make them great reads. I read several of the earlier volumes and now I'm reading whatever the library has available to borrow electronically. It's pretty haphazard, but I'm nonetheless enjoying my escape to Eighteenth Century England very much.
For tomorrow's Pink Saturday fun we're returning to Riverside Park for a special art show I've curated. I hope you'll join the fun.
As ever, thanks for visiting and take good care. Much love and of course, wash your hands.
Posted by Buttercup at 11:06 PM 10 comments: Links to this post

Posted by Buttercup at 9:31 PM 6 comments: Links to this post

Sunday in the Park with Masks (Mostly)

Alas, I downloaded my pictures of Riverside Park and they're not appearing. The little ball just keeps spinning. I'm assuming it's Blogger's semi-annual bout of temperment. I'll try again a little later, but I didn't want to let the day go by without saying hello.
Posted by Buttercup at 9:53 PM 8 comments: Links to this post 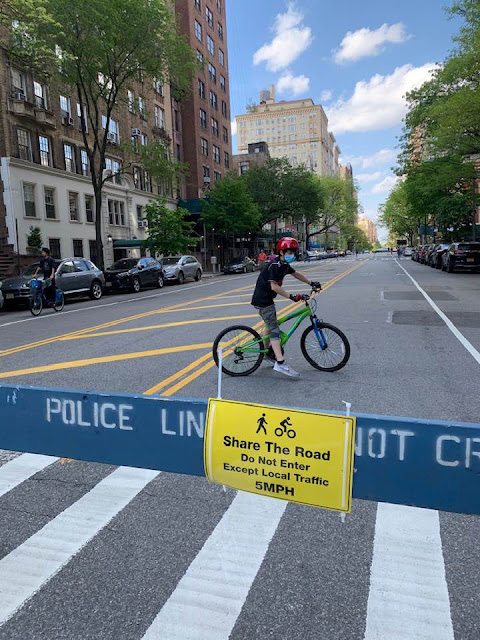 Bikes, games and walkers share the road with cars and trucks as part of  Open Streets
Open Streets began in March when a small group of streets -- generally adjacent to parks -- was closed to vehicles for part of the day. As March became April and now May, more streets have been added to the list. One of the streets is a portion of my street.
During the week the sidewalks and parks haven't been crowded, but come the weekends and the nicer weather, there are crowds. The program on this stretch just started on Wednesday and the street hasn't been crowded, but as the weather continues to get nicer I'm expecting more people enjoying the extra space. It's been particularly nice to see kids riding bikes -- lots of training wheels -- and playing games.
Posted by Buttercup at 11:54 PM 9 comments: Links to this post 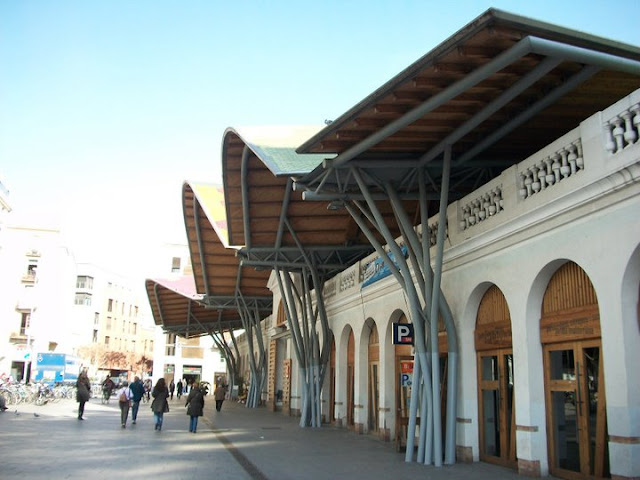 Let's get our groceries at the Mercat Santa Caterina
If 2020 hadn't taken the oddest twists and turns imaginable I would have just spent four days in Barcelona. In March 2019 my high school buddy Susan and I were both recovering from surgery. We got to talking about the vacations we would take one day and in the course of the conversation(s) we booked a Transatlantic cruise from Miami to Barcelona. The trip included a week at sea, which we both looked forward to, and stops in the Azores, Morocco and Southern Spain. I spent three days in Barcelona as part of a sixtieth birthday trip and I was looking forward to spending time there again as my seventieth birthday approached.
We had a list of things we wanted to see and we were just about to book our excursions when it was becoming clear that cruises wouldn't be sailing this spring. Our plans were mostly places I hadn't visited on my trip in 2010. But one place I wanted to return to was the fabulous food market, Santa Catarina. Originally built in 1845 on the site of the Convent of Santa Catarina, it was beautifully renovated in 2005. 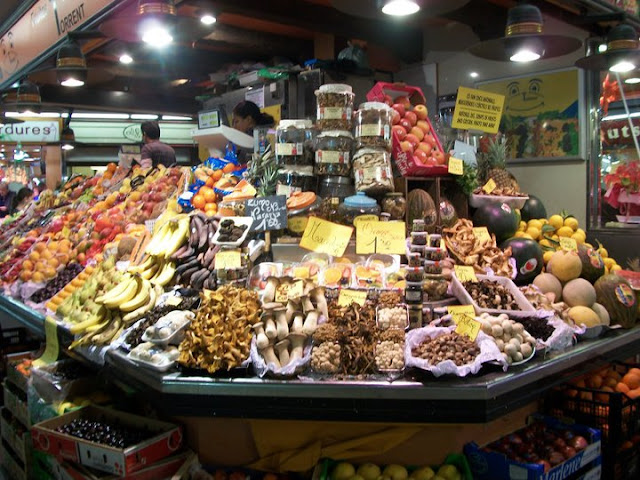 I'd love to choose dinner delicacies from this assortment
For many of us one of our main activities for the last few months has been food shopping and I thought it would be fun to have a change of place in one of my favorite markets anywhere. 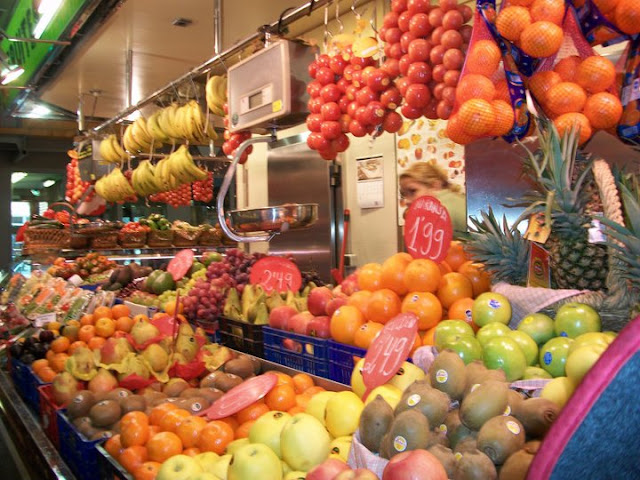 I wouldn't know where to begin here. Everything looks delicious.
What would be your choice?
I had a yummy pear for dessert tonight, so I will probably go with grapes.
It's been fun to dream of grocery shopping in Barcelona and more fun that all of Buttercupland was able to join me. Tell me what's been fun where you are. Maybe it's a book you're enjoying, a new television show or perhaps, an armchair trip.
As ever, thanks for visiting and take good care. Much love and wash your hands.
Posted by Buttercup at 11:21 PM 13 comments: Links to this post