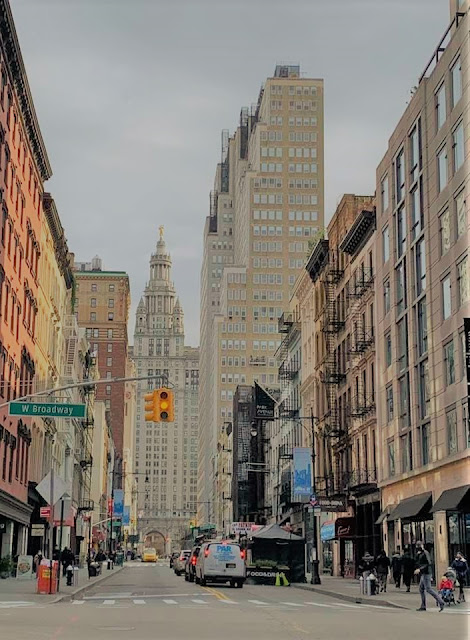 Looking East, to the Municipal Building

Although I got a lot of encouragement to jump into holiday photographs, I'm going to post my pictures of Lower Manhattan tonight and moving forward, will start displaying as many days of Christmas in New York as I can find. I'm sure there will be a few posts that have other topics, but we all need all the cheer we can muster and as of November 22, Buttercupland officially moves into the holiday mode. I'm not sure what that will mean if we have a further shutdown in New York City and many interiors become unavailable. I did do a lot of photography in advance and can do at least a dozen different new holiday posts from what I've taken this year. Fingers crossed for many reasons that New York can maintain the status quo.

During four different jobs I worked in this area of Lower Manhattan, though never in the Municipal Building, pictured above. At the end of the Nineteenth Century it became clear that City Hall, which actually is a relatively small building, could neither begin to accommodate all government offices, nor have an addition built to expand it. Work on the Municipal Building began in 1909 and was completed in 1914. Though it added thousands of square feet for offices, by 1939 the city workforce outgrew the building and alternate sites were found. Though I didn't work in this building I attended many meetings here and it was like stepping into 1950, with linoleum and metal desks as far as the eye could see. 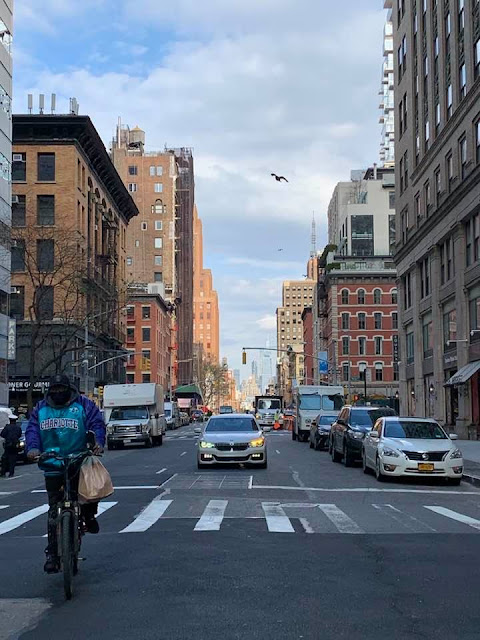 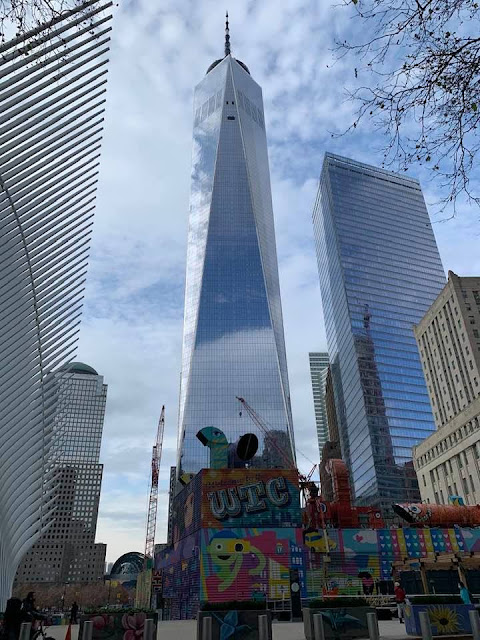 Looking west to One World Trade Center
I enjoyed my day as a tourist in Lower Manhattan, though I was sad to see the streets were relatively empty. It makes it safer to walk around, but so difficult for stores and restaurants to keep in business. I did a lot of window shopping, but didn't do any buying. I'm planning at least one more trip downtown to look at decorations and take pictures.
I had a reasonably productive Saturday. I walked over two miles, made a pot of carrot soup (which is now cooling) and cleaned out the crisper, using up several apples that were just on the right side of  being edible and perfect for adding to the soup. I unpacked one more box and discovered a few more books to be recycled. How was your day?

Thanks for joining us for Pink Saturday, and please be back tomorrow was Christmas in New York returns to Buttercupland.

As ever, thanks for visiting and take good care.

I am really looking forward to your tour of New York. You have started it off with a bang! Our kids have been there, but we are old now, and will likely never get there.

Beautiful views of your city. My Nieces always go there for a visit during Christmas and have done so for years. They canceled their trip this year because of the virus and are SO sad:( I told them to save their money and stay longer next year. I hope the city will be bustling again and SOON! Enjoy your day dear friend, HUGS!

Ir'a foos ro aww raw pixruewa and to know you can still get out and see the sights. I'm looking forward to pictures and hoping for the beset as we are all afraid that things might be shut down again with the rising numbers of Covoid 19. Keep safe and enjoy the holidays! Happy Thanksgiving. it will be different without the big parade this year.

That is to say good to see all your pictures . We are hoping for the best.

It is currently snowing bigly here in western NY, Buttercup. I always enjoy your photos of NYC...so sad to read what is happening here in NY state. sigh.

I love your photos of New York City. It makes me want to go window shopping there too. Alas, I won't be doing any of that for a while. Your soup sounds interesting. Carrots and apples? Hmmm. I'm looking forward to seeing Christmas in New York City. You have a wonderful day, hugs, Edna B.

Great post!
We spent our Saturday raking and mulching the millions of leaves in our
backyard. Then the rain cam and we had to stop so we both had a nap.
Today we will buzz around and watch our Chiefs play football tonight on
Primetime. AFTER watch Charlie Brown's Thanksgiving on PBS.

I love your posts showing us NYC! It's good that you're able to unpack some boxes now. This has been almost like moving!

Buttercup, Such cute window displays. I always love to see them. And better yet, seeing your big city. Thank you. I long to visit NYC again one day. Not sure that will ever happen, but I will dream. Blessings to you, be safe. xoxo, Susie