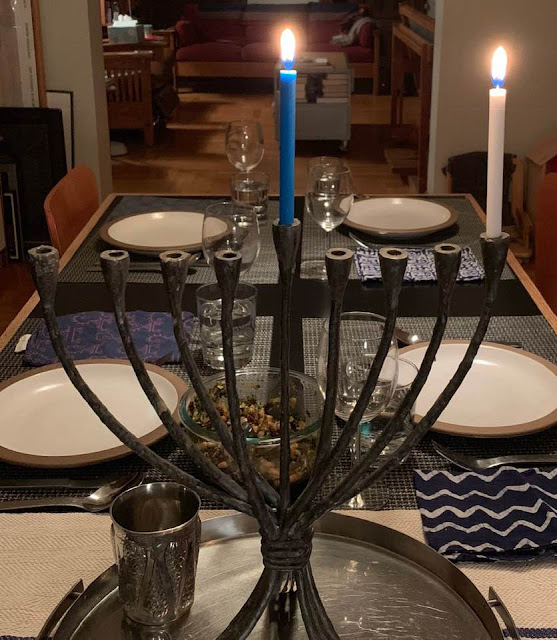 Candles on the first night of Chanukah

Wishes for days of light in the midst of the darkness and
warmth on the coldest days.

Last night was the first of the eight days of Chanukah. Each night one more candle is lit, until all eight candles in the menorah (Chanukah candle holder) are glowing. Chanukah commemorates a miracle that took place over 2200 years ago. The miracle was a relatively simple one. There was only enough  oil to light the sacred menorah in the temple for one night, and yet, miraculously the oil lasted for eight nights.

Centuries later I had the good fortune to join with friends of long standing and celebrate this miracle. We lit candles, said the blessings and ate latkes (potato pancakes). Latkes and jelly doughnuts are the traditional foods of Chanukah. Both treats are cooked in oil and remind us of the Chanukah miracle. I'm remiss in capturing photographs of the latkes. This year's version were unusually light and crispy and every thanks to the chef, my friend, Anita, for her efforts to create perfect latkes.

We've had glorious weather to usher in Chanukah and it looks to last through the week. It won't be a white Christmas, but I'll enjoy the snow in pictures. My goal for the night is to spend more time on cards and do a little present wrapping. What are your evening plans?

As ever, thanks for visiting. Wishes for miracles, large and small!
Posted by Buttercup at 7:14 PM

That is a pretty scene, with the one blue and one white candles. Happy Chanukah to you.

Blessings to you during this festive season! Thank you for all your wonderful blogposts this year. I’m looking forward to what the new decade offers!

May that lovely tradition be followed by many more blessings this season.

We have seen miracles here at times. 4 years ago this week they gave my husband days to live- called all the family in- cancer- 3$ chance of beating it. March 7th following year- cancer free and still is. It was a grueling, tough treatment but-I believe the miracle came though the hands of the physicians (God's angels earth) and the miracle of modern medicine. xo Diana

may you have a wonderful holiday filled with good friends and lots of delicious food. i appreciate all your kind words. they were encouraging to be sure knowing the struggles you have faced. have a very Happy Hannukah. enjoy.

Wishing you a Happy Chanukah and very Merry Christmas. No white Christmas here either in western NY. All the snow we did have is melting, sigh...I see New Years Eve week might be interesting, smiles

P.S. Hmm...Wondering if Pepe still is looking/waiting for a car? (giggling)

What a beautiful and meaningful celebration. Enjoy this holiday week my friend. We have quiet plans around the house and some hiking to look forward to! Holiday hugs!

Happy Chanukah! God is still in the business of miracles!

Wishing you too, days of light in the midst of the darkness and
warmth on the coldest days. Happy Holidays!