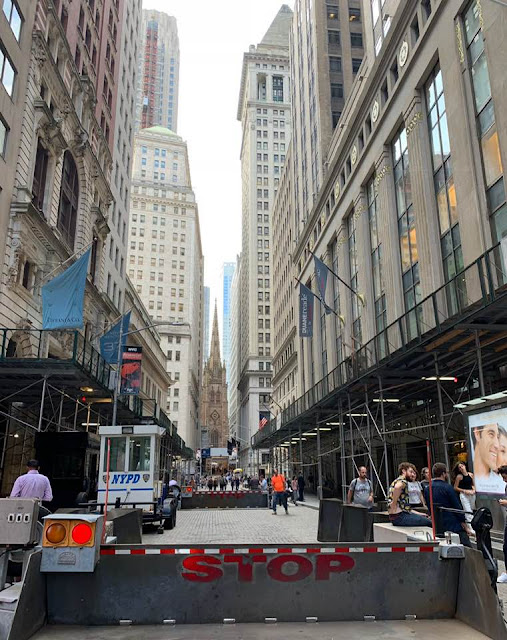 Wall Street looking west towards Trinity Church
Exactly eighteen years ago I was heading home from an evening meeting in the Bronx. It was part of a series of five meetings, one in each of the five boroughs of New York. I don't remember the dates of the other meetings, but I doubt if I will forget being in the Bronx on September 10. And exactly eighteen years ago tomorrow I stepped out of the subway in the spot above. There was no police presence and nothing was built to deter car bombs. I'd gotten off the subway here hundreds of times, but this day was very different. When I looked west to Trinity Church I remember seeing a million pieces of paper flying in the sky in back of the church and the sky was filled with smoke. I ran the three blocks to my office, not sure of what had exactly happened and the morning of September 11, 2001 unfolded.
There are infinite tiny details of the morning and the days that followed that stay frozen in amber in my mind. Perhaps my most vivid memory is standing at the window with colleagues on the second floor of our building at 2 Broadway and seeing the sky go dark at 10:30 a.m. when the North Tower of the Trade Center collapsed. We had been listening to the radio and learned about the Pentagon and flight 93 crashing. We realized this wasn't an isolated terrible accident. After that our building was evacuated and we all began the long trek home.
I walked through the Lower East Side and up First Avenue and then turned on 42nd Street and left my friend, Sandy, at Grand Central Station, where she was able to get a train home to Westchester. I continued to walk west and on Eighth Avenue, somewhere in the West 50s I caught a bus -- yes, buses were running uptown -- to a friend's apartment on West 66th Street, where I could begin to make phone calls and let family and friends know that I was alive. I had resisted getting a cell phone, so no one could reach me. One thing I will remember about the long walk home was turning around and seeing smoke rising from where the Twin Towers had stood. I couldn't begin to believe that they were no longer there.
This is my eleventh post about the worst day of my life and the worst day of many of our lives. I want to link back  to other posts I've done about September 11 for those who are new friends of Buttercupland.
I started writing this post about an hour ago. By this time eighteen years ago I was home from a rainy night in the Bronx. My first commitment of the day was a budget meeting at 10:00 am and I decided I would go in to the office a little late the next morning. I'd worked late and the next day was just an ordinary Tuesday in September. Of course, it was the least ordinary day I would ever know.
Posted by Buttercup at 10:52 PM

Wow, your story is powerful. Thank you for posting it, and for your other posts as well.

You were so close and I appreciate you sharing these posts.

So many of our family were also affected, as were you. YET in this time of loss it brought us all closer. <3

SAD day in America and we will never forget! HUGS and PRAYERS!

Your view of 911 is quite different than mine since you lived right where it happened. It had to have been a terrifying sight. I only saw it on TV. Glad you made it safe and ounce and I'm sure your loved ones were very glad to hear from you. Who ould ever forget.

Unashamed, I still weep. As each anniversary unfolds, your raw reflections have touched my heart.

You were there - I forgot - that must have been horrible and burned in your heart forever.

I’ll never forget that day. Here in Lancaster County it was beautifully sunny, and we were getting ready to start school. We felt in the middle of it all as we are only a few hours from NYC, a few hours from DC, and about the same from Shanksville, PA.

Thank you for sharing Carol.

Buttercup, my friend (and yours), Myra, gave me this link to your blog today, as I, too, had written a poem in remembrance of that tragic day. So very glad she did. I'll be subscribing via email.
Blessings to you!

Carol, Glad you told this story. We have not forgotten....so I know no one in NYC that was around then ever could forget. Blessings to you, xoxo, Susie

To have been in NY and been part of that horrible day has to be the worst memory of your life and I am so sorry you were witness to all that.

I had a meeting in Philadelphia that day. We watched the screens on TVs at the train station when we arrived in the city. The businessman that we were meeting with was sure that these attacks would also be happening in Europe and Israel. It seemed like it was the beginning of WWIII. I was relieved to leave the city. The sights we saw that day and the days after will live with us forever.

I watched it all unfold on TV as I sat with a cup of coffee the morning after my mother-in-laws funeral. When the first plane hitting a building was thought to be a terrible accident. Then we all saw the next one happen live. Then there was the next one. And the next one. So terrible. So impossible to believe as we watched on TV. Cannot imagine how it must have been to watch it happen in person in the space you call home. Thank you for sharing your experience.

Thank you for sharing this, Buttercup. For some reason I have been reading a lot of these this year and watching survivors' stories on youtube.