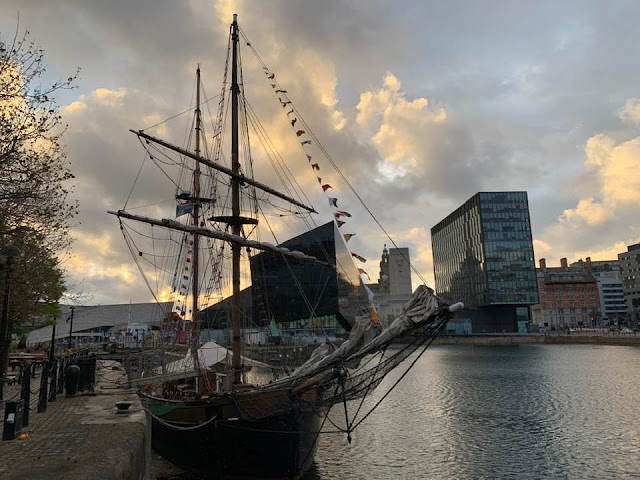 Sunset across the River Mersey

One of my favorite songs when I was in high school was Gerry and the Pacemakers, Ferry Cross the Mersey. I knew about the Mersey sound and of course, the Beatles as well as Gerry and the Pacemakers. These were Liverpool bands, but my thoughts of Beatles' sights tended more to focus on Abbey Road in London. When I made my list of places I wanted to visit in England, Liverpool never got to the top of the list. Fortunately my cruise through the Scottish Islands sailed from Liverpool and I planned a three day visit there before the cruise. One day was to insure that with any flight delays I would still get to Liverpool in time for the cruise. Another day was to see Liverpool and the third day was to spend time with my blog friends, Sheilagh and Ralph. 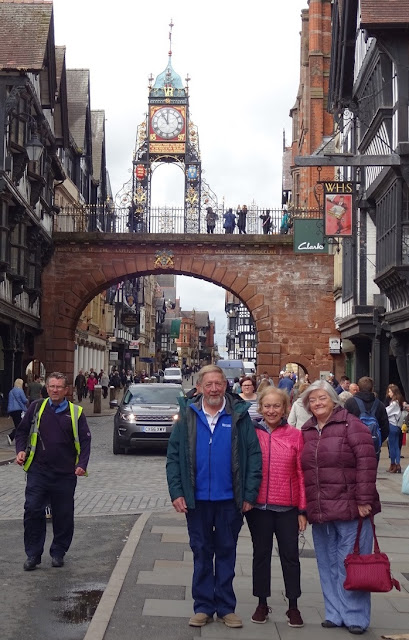 It wouldn't be a vacation if it didn't include blog friends!
Ralph, Sheilagh and I in Chester, England. Two of the most gracious hosts imaginable. 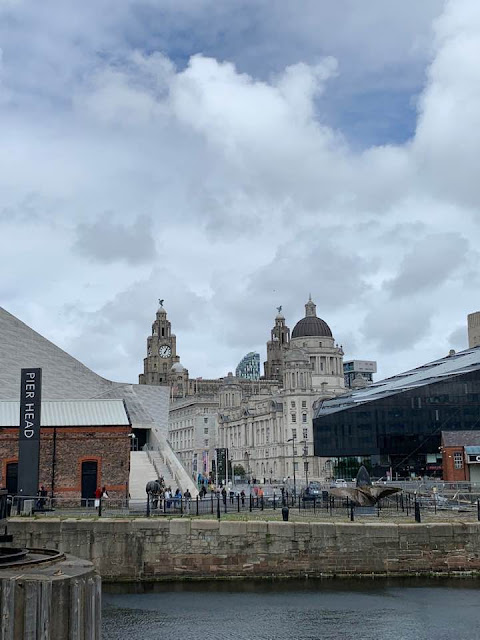 Pier Head of the Royal Albert Dock, Liverpool
Even with a year of English History in college, I had very little to no knowledge of the history of Liverpool. It was a major shipping and immigration port and the Royal Albert Dock was built in 1846 to accommodate the shipping industry. It was the first structure in England to be built without any wood, which made it non-combustible. With changes in shipping it was closed in 1972 and then reopened as a tourist site in 1984. The views are extraordinary and there are a number of museums in the Dock area, National Museums Liverpool. One of them is the International Slavery Musuem, which includes Liverpool's role in the Triangular Trade across the Atlantic. 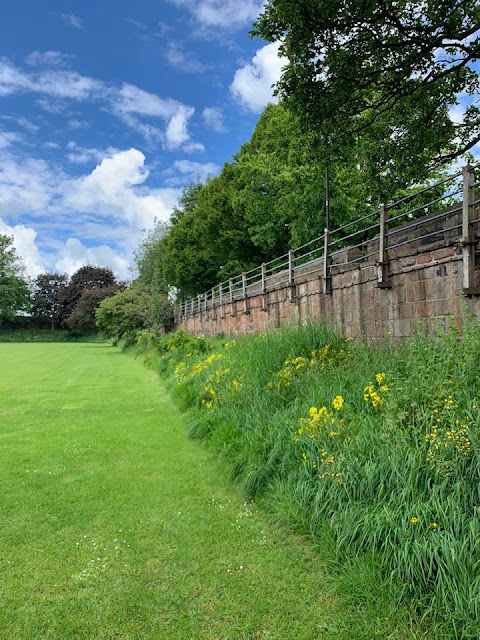 The Roman Wall in Chester
I spent an extraordinary day in Chester with Sheilagh and Ralph. Sadly our dear friend Marie wasn't feeling well and I missed seeing her. I wasn't familiar with Chester before planning this trip. Though it's Marie's home, it wasn't on my radar. I'm very grateful that my friends suggested it. It dates back to Roman times and has a beautiful cathedral, which we visited. The picture above was taken on the cathedral grounds and includes the original Roman Wall. The weather was as splendid as it appears in the photograph and it was a perfect day. Good food, beautiful sights and great friends!

The English part of the trip surpassed any expectations that I had. I enjoyed all of the sights, learning about the history of the area with which I was quite unfamiliar and seeing friends. I spent the  morning before boarding in Liverpool doing a few last minute errands and visiting the Liverpool Museum. I especially enjoyed seeing an exhibit about John Lennon and Yoko Ono. 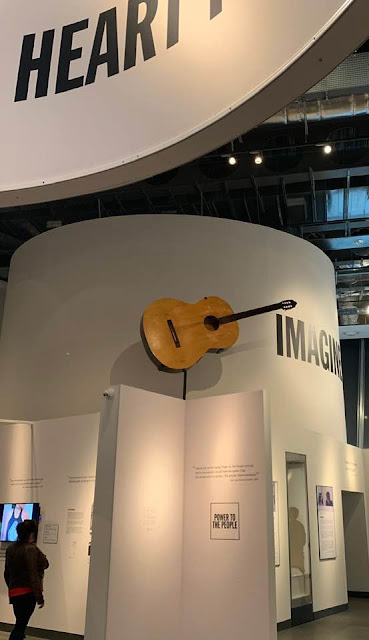 Imagine...
Next stop, Scotland!
I've gotten a slow start back to blogging, but back I am. I will be featuring other parts of the trip throughout the rest of June and July, as well as returning to New York, coffee and book posts.
As ever, thanks for visiting and sending wishes for a great week!﻿
﻿
Posted by Buttercup at 11:09 PM

Thank you for the tour of Liverpool. I just loved the Beatles - I saw them in 1963 in Atlanta. I heard of Gerry and the Pacemakers and Ferry Cross the Mersey - what is funny is that I never knew the words they were singing! Now I know. Lol Sandie

What a lovely post! I was a teenager at the time of The Beatles and the British Invasion. So of curse I loved Ferry Cross the Mersey. All your pictures are gorgeous, my favorites being the first two and the Roman Wall. I just watched a special on John & Yoko yesterday! It revealed that Yoko really wrote the words to Imagine.

How very nice to visit with friends along with seeing so much too. I love all the pictures of places I've never seen. Looking forward to seeing more!

It sounds like you are having a marvelous time, Carol. How wonderful it must be to meet blogging friends from around the world.

You look so wonderful and happy! Gerry and the Pacemakers were a big favorite of mine, as well. (I still love that song.)

Lovely photos and cherished memories. How fun to have blogging friends as hosts. Thank you for your kind comment. xo Mildred

Great post. The Beatles were before my time but I have a little nephew thats only 4 and Loves the Beatles and Monkeys. He has several videos of them that he loves to watch and knows most of the songs. He even has little t-shirts of them.
These are some really pretty photos. Glad you had a great time.
Lisa

It was nice tagging along on your vacation. I look forward to seeing more.
Thank you for stopping by and leaving a comment on my blog. Always a pleasure to see new people drop by