And the Line Went Around the Corner 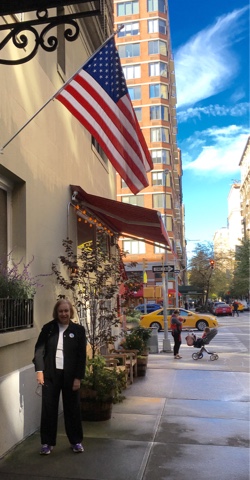 My voter sticker fell off soon after this picture was taken, so this is the only record of Buttercup and sticker together. ﻿

This was the twelfth presidential election I've voted in. The first was absentee when I was in graduate school and the other eleven have been in New York City. There have been some long lines, including 2012 when new voting machines were installed in New York and I waited an hour, but I've never seen what I saw today. The line to vote stretched around the corner.

This was the scene that greeted me as I walked to my polling place. I vote at a public school and the entrance is more than half way up the block. The line began to the right of the bus. 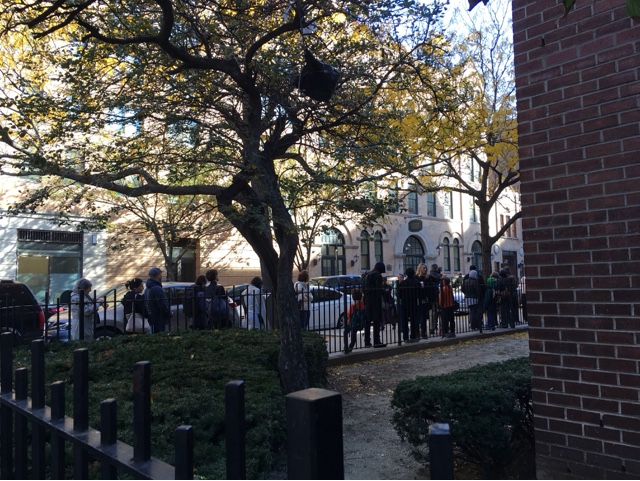 The line turned around the corner... 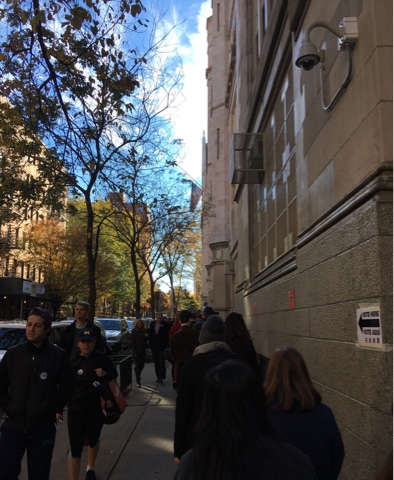 The PTA held a bake sale and the theme was red, white and blue. ﻿

Now we wait. We all have our opinions, including me. But you won't see them in Buttercupland. This is the place where everyone is welcome, whether you vote red or you vote blue.  All I'm asking is that you vote.

As ever, thanks for visiting. Take good care and vote!

I'm hoping my line isn't that long. Thanks for this post!

Good Evening Carol, The Presidential Election is on the news at the moment, here in England, talking about both candidates.
I agree with you, it is so important to use your vote and judging by the queues, that is exactly what is happening.
I watch with baited breath.
Best Wishes to you.
Daphne

As always LOVE seeing your adventures! I was 204 in my district at 11 am today.

I voted absentee a couple of weeks ago. I'm trying to see how long I can sit under a rock and not listen to anything about the election . So far so good.

I am thankful we live in a country where every one has the right to vote. It was good to see a great turnout at the polls yesterday ! The weather held out here and made it a great day to be out.

Good morning, sweet friend! My, what a line! The first time I voted was when I was 18-years-old and it was my first year in college in Wisconsin. There was such a thrill waiting in line to cast my vote {{smiles}} The last three times that I have voted have been by absentee ballot. Love the picture of you!

Buttercup, I don't like to talk red or blue on my blog either. But I will gladly talk red, white and blue. :):) I am glad our election's done. I am wore out from the stress of it all. Blessings to you, xoxo, Susie

That was a pretty long line. We had some of those here too.