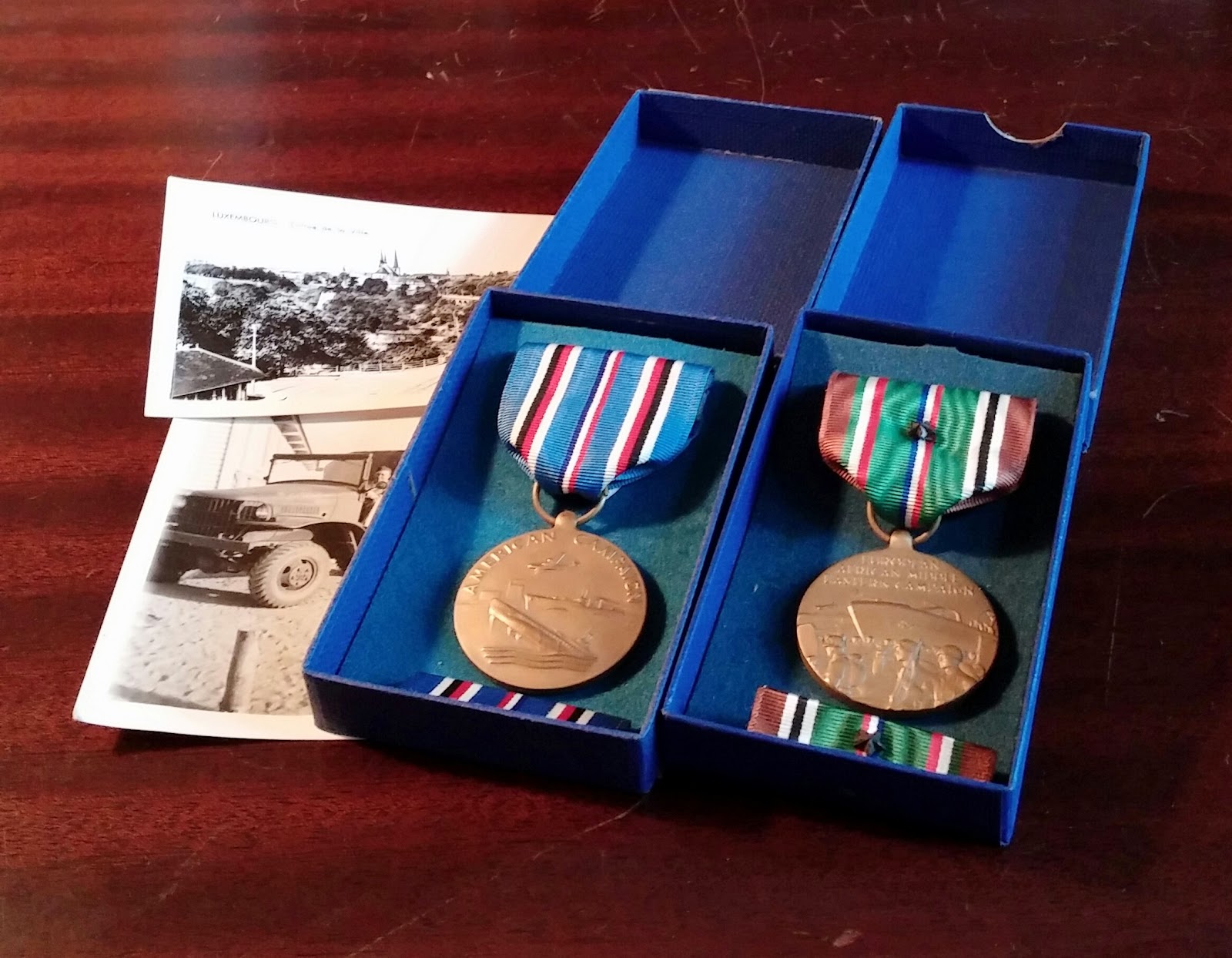 Today is the seventieth anniversary of D-Day, the day the Allied Forces landed in Normandy. I've long been fascinated by this time in history. Maybe it was my father's stories of his Army service or perhaps it was seeing the movie, "The Longest Day" in 1962.

I remember my father talking often about being in the Army and being in Europe during the war. But except for one set of photos of Luxembourg -- one of them is in the Upper Left in the photograph above -- there are few other physical reminders of his service. I have six medals and before last night I'd never looked at them very carefully. The one on the right is for active service in Europe, North Africa or the Middle East. I learned in my research that the small star in the ribbon and in the bar denotes service in a battle.

One of the places I most wanted to see were the beaches at Normandy and I was fortunate to be able to travel to France in 1985 to make this pilgrimage.  I am still in awe of the courage it took to land on a beach with enemy fire all around, and I am especially in awe of the Rangers who scaled Pointe du hoc to disable the German guns. As the years have gone by I grow more in awe each year. 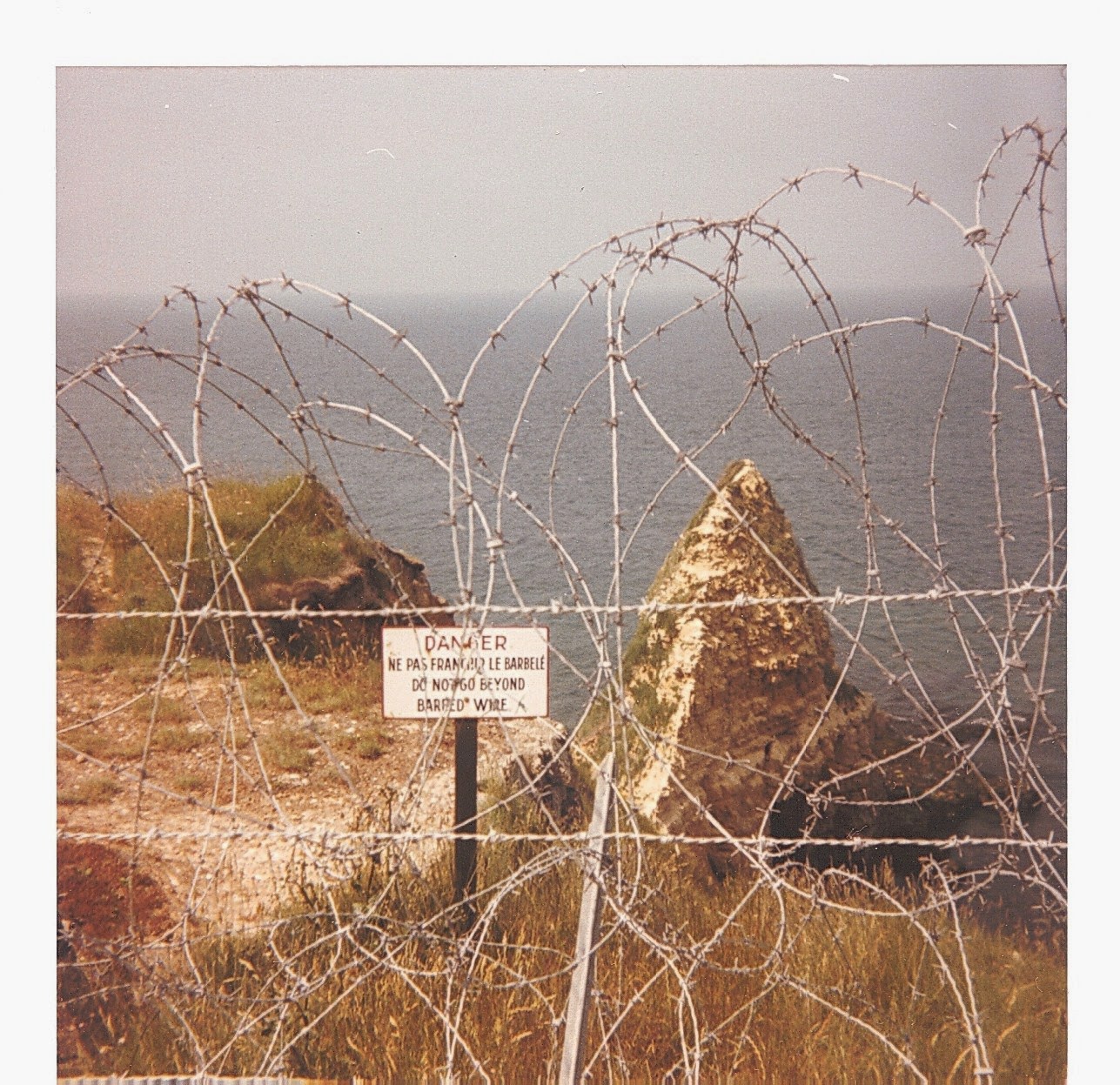 This is the top of Pointe du Hoc. The German guns were here, and it was critical that they were dismantled. 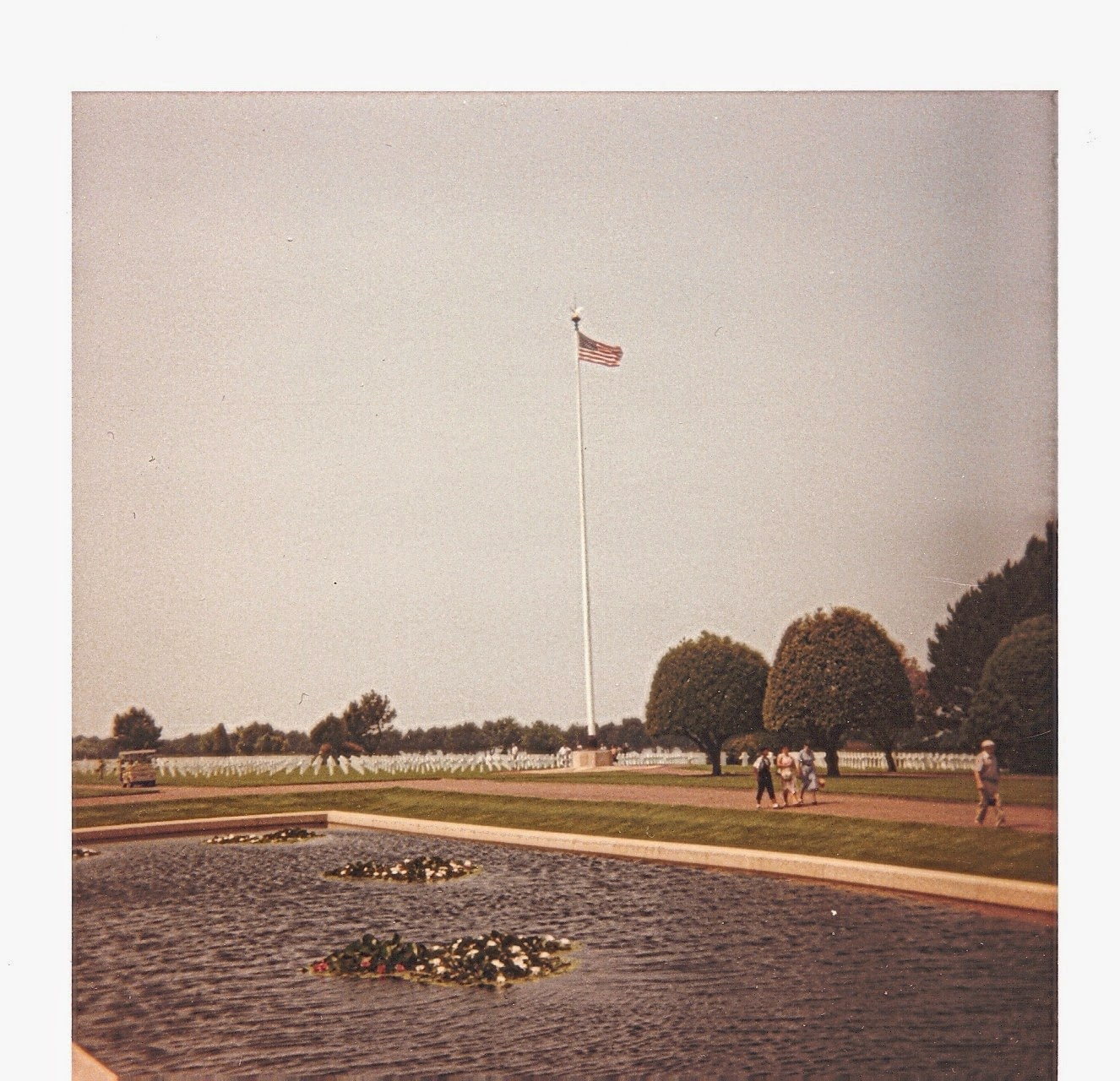 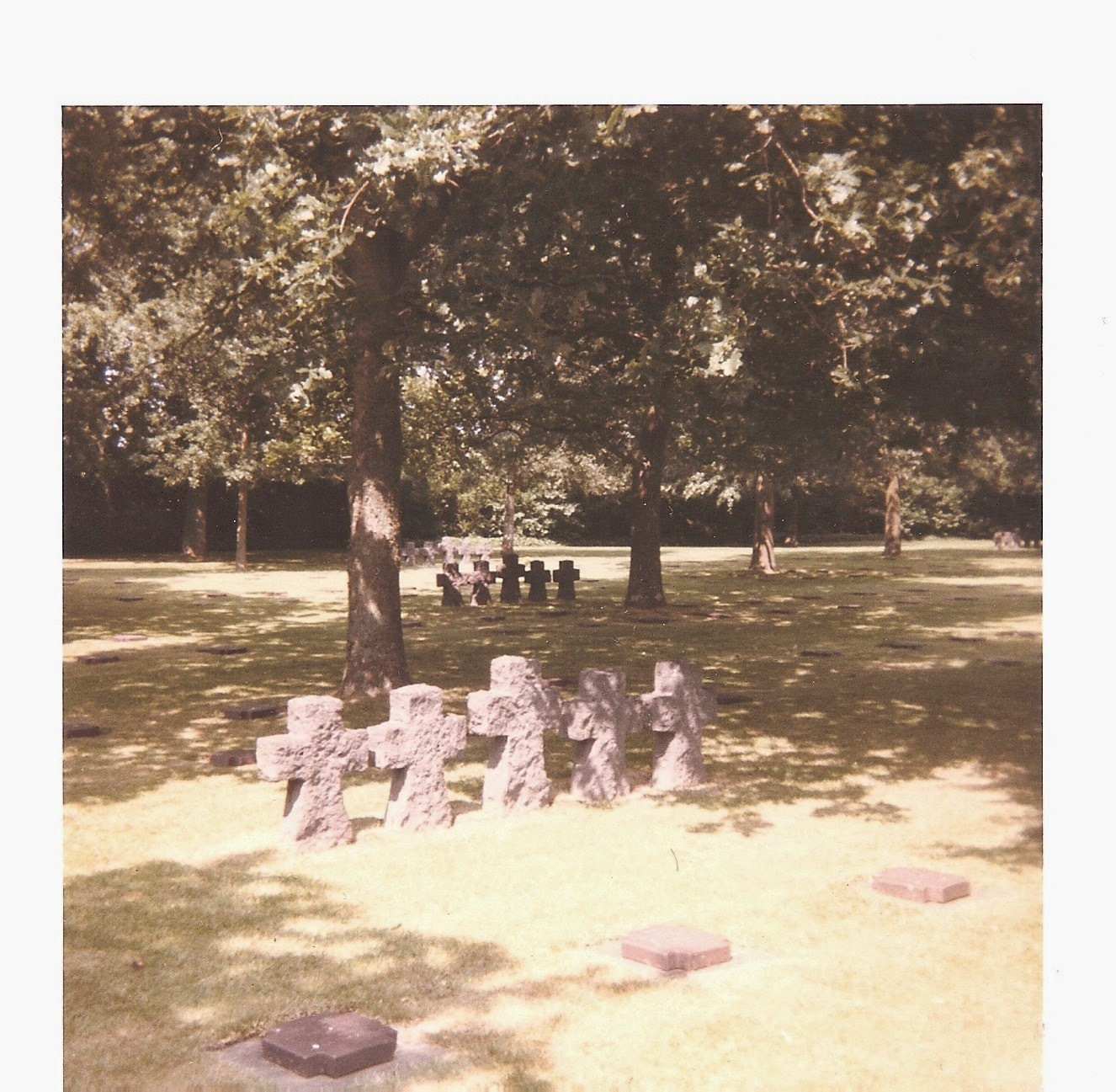 I made no notes on the backs of these photographs in 1985 and I am not sure who is buried in these graves. Their stories, like my father's stories, may now be lost. My father died three years before I went to Normandy and when I returned I didn't ask my mother what she might have remembered my father discussing about his war service. What is remembered is the bravery, the courage and the steadfastness that was shown on June 6, 1944.

My father was one of the lucky ones. He came home from Europe, met my mother and started a family. But at the end of his days he was still proud to have been PFC, US Army, 1941-1945.

With Grateful Remembrance for those who gave so much on
June 6, 1944.
Posted by Buttercup at 1:48 PM

Dear Carole, I think we all look back at our youth and often wish we asked more questions. At the time it seems like we will have so many days ahead together and it does not always turn out that way.
I often wish I had asked my parents questions of this time in history too.
Thank you to your dad and to you for sharing.
Blessings dear. Catherine

This is a great post and we are indebted to all who served during WWII. My uncles and my husbands' uncles both served then from France, to Italy, Germany and the Philippines, but not one of them would ever talk about it. There were so many questions we had, but I knew better than to mention it. They all came home, some with injuries. Thanks to your father and all the others!

Thank you for this remembrance, Carol. I, too, am in awe of what those men did that day--and all the days of World War II. My father was a veteran of WWII, also. He fought in the Pacific Theatre. He didn't talk a lot about his experiences as I was growing up. But back in the 1990s, I asked him to write down stories from his life and gave him a notebook. He filled it and half of another. I also have some letters that he sent home to his sister during his time in service. I treasure all of those.

It is a day to remember for sure.
My Dad was in the Navy and I have
his medals, but my pea brain can't remember which war he was in. :(
I need to figure that out I guess.

This certainly is a day to remember. Your pictures tell us so much! Such bravery and courage was shown.

I, too, failed to pause long enough to ask my father about his (Navy) service.

Tom and I were just talking about this ... how that generation's sense of duty seems almost unparalleled.

What a debt of gratitude is owed!

I got goose bumps as I read this post and learned about the quiet courage of your dad, and the Rangers, and all the brave men who saved our Republic.

Always grateful to those who have served, as well as those who are currently serving.

What a heartfelt post. I, too, am sorry that I did not ask more and write notes on the back of photos etc. My heart is full of gratitude.

A lovely tribute to your father and all veterans today.

Amazing post and pictures! I can't imagine seeing those scenes! We watched several shows last night about D-Day! My Dad was in WWII in the Navy! Sending hugs your way this morning! HUGS!

Buttercup, I thank your father for his courage. You must be proud . It was so very nice that you did travel to Normandy. What an honor. Blessings, xoxo,Susie

Wonderful photos, Carol!My son also visited the Normandy beaches, about 12 years ago, while he was backpacking through Europe. He went on a fabulous all day van tour with a French woman guide.

Wonderful photos! It really is such a poignant time in our world.