What a Difference (Not Quite) A Week Makes...

Last week at this time Hurricane Irene had just come through and I was preparing for surgery.

Today the sun is shining... 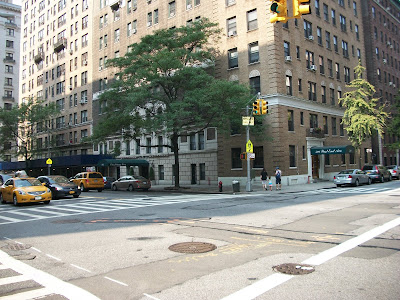 And the roughest part of the surgery and worry is behind me. I really am feeling better and went out for what has become my walk of the day -- at least for the last few days. I walk one block to Broadway and do a tiny errand or two. I promise that I am not carrying anything heavier than the newspaper and a cup of coffee. I thought you might want to join me on my morning jaunt today. I've been going out for a few days, but this is the first day I felt so-much my "regular" self that I took my camera.

I had two stops. One was the Dunkin' Donuts a block away and across Broadway. Beloved animal friend waited patiently for a coffee customer to emerge. 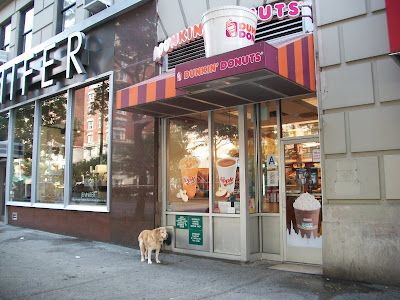 The fall flavors are here, including my all-time favorite, pumpkin. I couldn't resist. 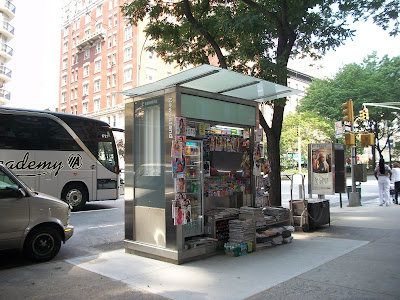 What does watching endless amounts of television have to do with a news stand?

One of my main activities this week has been watching television. My concentration is still flighty and I'm just beginning to get through most of the daily newspaper or a magazine. A book is still a few days away. But I've watched a lot of television, to mixed reviews. I don't watch much generally, so this has been a real change for me. "Say Yes to the Dress" and "What Not to Wear" have been perfect, fun and upbeat. Three episodes of "Law and Order" in a row have made me question the base nature of my fellow New Yorkers and two episodes of a true crime show -- I don't remember the name and surely won't watch it again -- made me believe that all California teenagers are potential murderers.

To answer my question... I watched several episodes of "Extreme Couponing" and went in search of coupons. None on this holiday, to my disappointment. I can't imagine becoming an extreme couponer. My entire apartment is smaller than most coupon users' storage space, but I am intrigued with the thought that I could save $5.00/week with better use of coupons. I know I'm feeling better when I start to think "If I saved $250.00 a year by using coupons that could be an airline ticket to...

My wishes for a fun and sunny rest of the weekend!
Posted by Buttercup at 7:08 PM

Thanks for the tour and your well wishes. We wish that you too have a nice and peaceful week. Glad you asr on the mend. Hugs! Loretta

I loved taking a stroll with you! I am not an extreme couponer but save between 25 and 50 percent on my grocery bill:) It is worth the time!

Enjoy your weekend, hope you continue to feel better and better!

Thank you for sharing your walk with us. I have lived in large cities before, but it has been a long time. I enjoyed the sites. The television is rarely on at our house and when I do watch it, I am with my Mom usually. She watches a lot of sports...baseball. World Series will be her next venue that she really loves. Today was "Lifetime" channel. Murder stories...not fun for me! I am glad you are recovering well and were ready to photo your walk.
Thanks for visiting "Being Woven" tonight, too.
Caring and praying for you, ~ linda

I enjoyed our walk together. Glad you are feeling better each day. Once upon a time I used to coupon. Shaved $40-$50 off grocery bills back then. Never thought of buying an airline ticket. But I do believe you're on to something.... Take care. Don't overdose on TV.

Glad you're feeling better and back to photographing NY again!!!

With surgery, a week's recovery does make a huge difference!
I love "What Not to Wear". It has truly helped me dress better. Some days when I put on an outfit, I try to look at it through Clinton and Stacy's eyes! Do you watch any HGTV decorating shows? I love them, too.
Couponing - - I don't do it big but when I have them organized, I use them. When a few expire or I forget them, I don't regret it but rather am thankful for the few dollars I save. In fact, I keep an Excel spreadsheet to see how much I save each month with sales and coupons. Even if I wouldn't pay full price for some things - - like clothing, it's still encouraging to see the savings accumulate.

You do sound more like your old self too. Glad you are feeling so much better. How great you have sunshine there...it's raining and chilly here this evening.

P.S. Coupons aren't generally inserted in Sunday papers on a holiday weekend. That's why you didn't find any. They did doubles last week though.

Enjoyed the morning walk. Glad you are feeling stronger every day. I like the way you broke couponing down into a manageable number! I like the idea of saving $5 a week. More than that and I start getting hives just thinking about it. hee hee. blessings ~ tanna

So glad to hear that you are able to get out and about! Fresh air and sunshine are the two best things for you.
TV I'm not sure of but it does help pass the time.
It is always good to look back and be glad that you are not at the point you were a week ago.

Have a great Monday!