On the Street Where I Live (Almost) 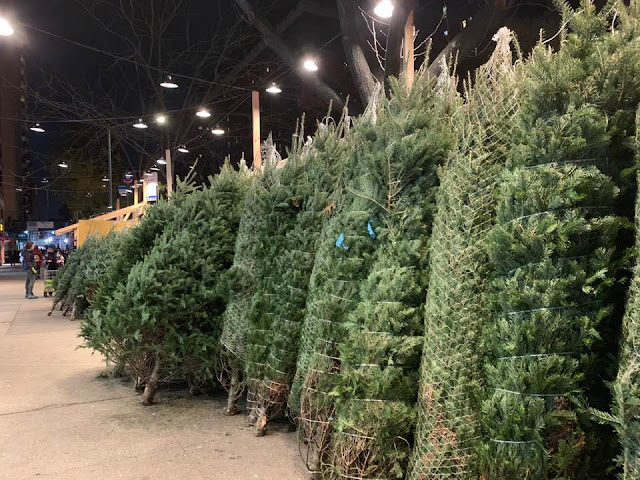 The trees have arrived!

One of my favorite days of the year is the day the trees arrive. This stand is two blocks from home and I pass it at least once a day. The bus stop is on this block and it's my route home from the subway. 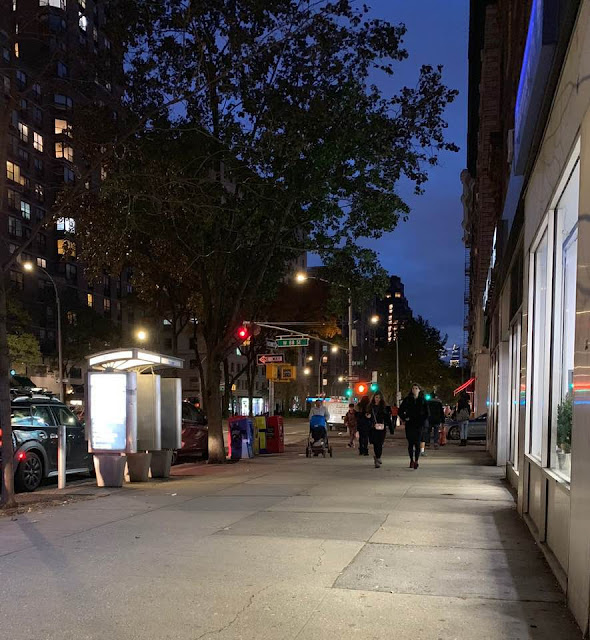 This is the general look of the block. My drugstore is on the right and Broadway is on the left. There's usually at least one person with a baby carriage, people are walking and generally someone is walking a dog or two. Yes, it's Broadway, but it's not the Broadway people think of when they think of Broadway in New York City. The theaters and bright lights are two miles south.

It all changes when the trees arrive, on this block and many blocks all over New York City. On our block the same people have arrived from Canada for at least ten years. The block is transformed. It goes from concrete and steel to an enchanted forest, wonderfully fragrant with the aroma of evergreen. The enchantment remains until Christmas Day. When I've arrived home after visiting friends on December 26, the trees and the aroma and all the magic of the season is gone. Yes, it's a let down. No matter how much fun I've had in celebration I'm sad to see the block returned to its regular state.

This was not the intended subject that I hoped to blog about today due to a change in plans. But I hope you'll enjoy a visit to my corner of New York instead.

Thanks for the congratulations to Nessie and Pep and the comments about the Grand Central event. I'm not quite sure what was taking place there, but that's what makes New York City interesting. The two other wedding photo events I've seen there were just that, photo events. I've yet to see a wedding in Grand Central Station, but I'll be on the lookout.
It's December 5 and I'm starting to fall woefully behind in holiday doings. I've got cards to address and packages to wrap and mail all over my dining area table. I had hoped to be further along, but real life gets in the way. Happily, it's all good things in real life and I'm so grateful for all of it.

As ever, thanks for visiting and take good care.
Posted by Buttercup at 10:25 PM

I am behind on cards too. I have not started a single one. But I do have some gifts wrapped, and all of the gifts bought. So you work in a drug store? That must be interesting! Are you a pharmacy tech? I bet those trees make the whole neighborhood smell so good!

I thought for a minute you lived right there where the action is on Broadway!

it looks like a wonderful neighborhood. thank you for sharing. love those trees.

Starting on Thanksgiving weekend, Christmas tree lots start springing up around here too. The fragrance is wonderful. It's fun to see where you shop. I wish you a very nice day. xo

I love the trees. My Nieces are headed up for their yearly visit in a couple weeks. Christmas is coming too quick for me and I am WAY behind on EVERYTHING. One day at a time, one thing accomplished at a time... that's all we can do. Have a blessed day dear friend, HUGS!

Loved seeing your corner of the world today. You are blessed to be able to walk so much. I'm afraid I can no longer do much of that at all and would never make it down your street. It must smell so very wonderful with that fresh pine scent. You are blessed.

Oh, I wish I might inhale deeply and experience some of that wonderful aroma! I don't know that I'm surprised, exactly; rather, impressed by the clean super-wide sidewalk. Thanks for sharing your neighborhood with us!

Loved this glimpse of the good things that make folks love New York. The Christmas tree vendors who came here every year were from Wisconsin. We rarely pass that lot since we moved. Your post has me eager to see if they are there again this year!

I love Christmas trees and I can just imagine it with them on your street!

A forest of Christmas trees in the street, how perfect!
Wren x