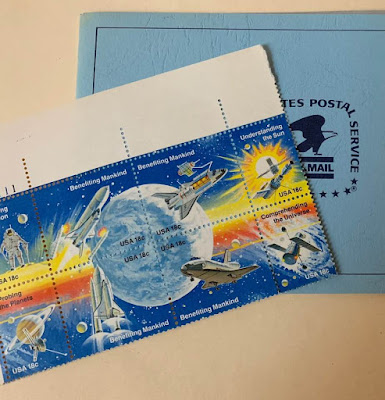 Commemorating NASA's Achievements, 1981 Stamps
It's not an event I think about very often, but like so many of the landmark historic times in my life, I know exactly where I was the night I saw men walk on the moon. It was the summer between my freshman and sophomore years in college. I was working as a waitress at the Maple Hill Restaurant in Hartford. My shift ended at eight and I was usually home by 8:30. I would have been exhausted. I worked six-day weeks and our busiest days were Saturday and Sunday. By Sunday night my only activity was taking off my shoes and collapsing in front of the television. In retrospect I doubt if I watched the moon landing live, since I'd been at work all day. But I still felt the excitement and I settled into my chair in our den and my parents and I watched television together.
It was a different world in 1969. There were no cell phones and no iPads and our total attention was the activity on the black and white screen in front of us. Men were walking on the moon! It's difficult to explain the excitement I felt watching the scene in front of me. Somehow NASA's achievement was all of America's achievement and there was an enormous sense of national pride for this "one small step for a man, one giant leap for mankind."

There were five more moon landings to come, but I can't remember where I was for the rest of them. Like so many other moments in history they have receded into a far corner of my memory. But the night exactly fifty years ago has stayed clearly in my mind.

I'll be back tomorrow with the winner of the Scotland giveaway and more pictures of my trip to Scotland.

As ever, thanks for visiting and keep cool!
Posted by Buttercup at 9:58 PM

That was so long ago that I actually forget. Yet I remember what I was doing when John Kennedy was assassinated, when John Lennon was killed, when 911 happened.

You know I don't remember actually - but I was a live. I guess I was sitting in front of the TV watching it. sandie

I wasn't even born yet. The first big event to register with me was Ronald Regan's assassination attempt when I was 11.

I have SO enjoyed watching lots of coverage of that day! I loved the interviews with those who were actually involved in putting the "Man on the Moon", seeing them then and now. I can't believe it has been 50 years, I was 15 at the time and watched on a black and white TV. My goodness how times have changed. Have a blessed and beautiful day dear friend, HUGS!

I was probably at work like you but remember watching it on TV. Those were certainly different days for sure. I've always been in awe for this bold pioneers of space travel. Lots has been on the news here all week with all the memories of those days. Hope you are keeping cool there, we are finally getting some relief.

My parents and I had traveled to Michigan, where my older sister was a summer missionary. She lived in a tiny apartment and we all gathered around her small black and white tv to watch! (I would have been 12)
Wishing you a nice Sunday.

I was 9 at the time, and don't remember watching it, but I am sure my parents did, and we probably did also!

I remember it well. We lived in a small apartment in Bad Axe, Michigan and my baby boy was a year old. We sat and watched it with awe and were thrilled when they stepped on the surface of the moon. It was magnificent.