M Is for the Museum of Natural History 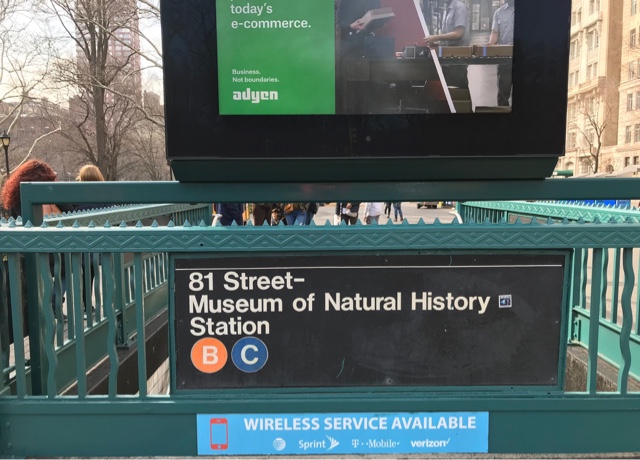 Welcome to the American Museum of Natural History
If we remember our subway history from just a few posts ago, this sign once read B and K. In 1988 the K line became the C line and it has stayed the C line for the last thirty years. We're now at the next stop going north from West 72nd Street and the Dakota. Central Park is on one side of Central Park West and on the other side of the street is the Museum of Natural History, which I highly recommend if you are visiting New York City.﻿ 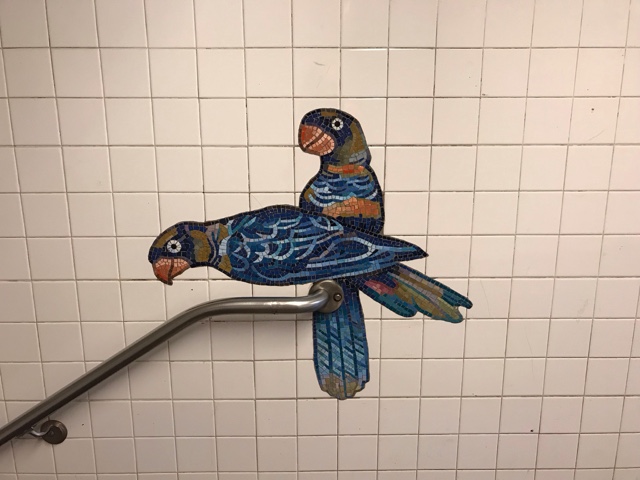 The station has wonderful mosaics reflecting the collection and work of the museum.  This is a just one sample of work that includes casts of fossils. 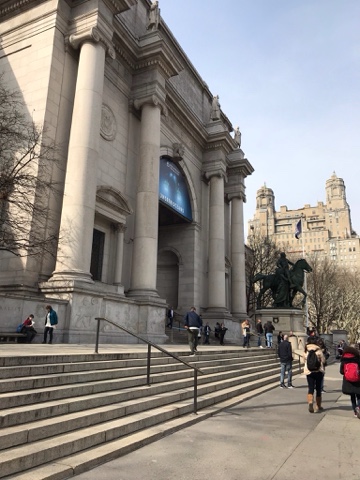 The museum was begun in 1869. It quickly outgrew its original exhibition space in the Central Park Arsenal. President Ulysses S. Grant presided over the cornerstone ceremony for the present building in 1874. As a personal aside, I had the great good fortune to work at the museum for two years in the late 1970s. One of my favorite memories was walking out of the building in the evenings -- the staff entrance is  on a lower level in back of these stairs -- and passing the exhibits. It was a scene out of the movie, "Night at the Museum." I was spooked at first. The lights were turned down in the evenings and there were few people walking around. But as time went by I came to treasure the uniqueness of the experience. 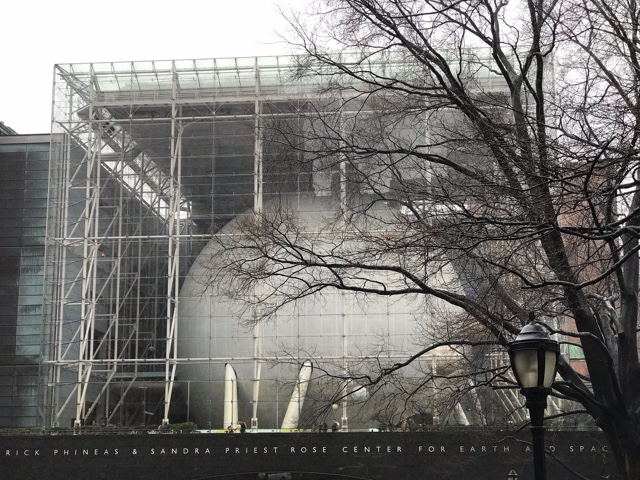 The Hayden Planetarium  has a beautiful new home in the Rose Center for Earth and Space. The original planetarium opened in 1935 and for many of my friends -- and for me --  it was our first introduction to astronomy. In 2000 the Planetarium became part of the newly created Rose Center.
The next stop on our A to Z Blogging Challenge tour will take us to one of the busiest stations in New York City. No other clues, but we'll be joined by an estimated 200,000 other people on our visit. I hope you will join us for the subway ride. ﻿
As ever, thanks for visiting. I hope we all get to see spring very quickly. I think the groundhog told us a fib and I am tired of my winter coat and gloves. Spring, please come soon!
﻿
Posted by Buttercup at 10:37 PM

I'm enjoying your posts and learning a lot! It does make me think you are brave to get out and go all the places you go in the big city! Hugs!

The Planetarium and the Museum of Natural History are such treasures and a definite stop for anyone visiting NY.

I'm happy to report that there is now light at the end of the tunnel here and Spring is about to take a turn for the best. It's warmer and sunny today and the long range forecast is looking good too! We're looking at 50's and 60's next week! I love museums and working at one must have been quite an adventure. I don't recall ever having visited a planetarium. Just looking at that one is a sight to see.

Buttercup, Working in a museum sounds interesting. You seem to find many wonderful things in the subway. Glad your weather is better too. It was heavenly here today. Blessings, xoxo, Susie

working at the Museum of Natural History must have been wonderful indeed. What a surrealistic scene you describe at night when getting off of work. i personally would enjoy spending time at a Planetarium.

Loved the photo. And I enviy you having worked in a museum. I did it too, but for only a few days and I still remember it after decades.