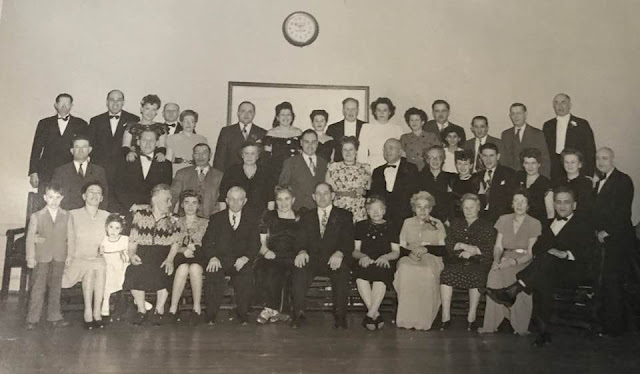 Almost exactly seventy-one years ago tonight...
...my parents were married. My parents weren't especially formal people and I have no memory of them attending other white tie events when I was growing up. But here the family (this is my maternal grandmother's family) gathers in white tie and gowns to celebrate my parents' marriage. My mother recounted the story every year of the blizzard that fell in the northeast on March 2, 1947 and almost put a damper on her wedding. Many of our relatives came from New York and tonight I marvel that they didn't let a blizzard get in the way of what then was a fairly arduous trip on the Merritt Parkway, the precursor to Interstate-95.
It was also my father's birthday. When I was younger I thought it odd that my parents chose one of their birthdays for their wedding. But for my father this may have been the best birthday present ever. After surviving four years in the army, including a year of European battles, starting a new life was a wonderful gift. My father would have been 101 today -- though he has been gone almost 40 years last month. 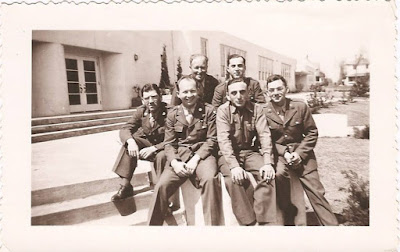 There is no notation about the place or year on this picture,
but from memory I think it's Fort Sill in 1942.
My father is in the back, on the left.
﻿
When I wrote about my mother's birthday in October I had equal parts of gratitude and sadness, but looking at these two smiling pictures of my father it's all happy memories tonight. Happy anniversary to my parents and happy birthday wishes to my father. Thank you both for years of happy memories.
We don't have the blizzard of March 1947 today, but March 2, 2018 will be remembered for a Nor'easter of major proportions. Despite my resolve to get out and walk this was not the day to do it. The morning started with sleet, heavy (and cold) rain and high winds. I did make it to the gym for yoga and strength machine time, but will make up my miles another less turbulent day. I hope everyone else in the path of this storm emerged unscathed.
As ever, thanks for visiting and take good care.
﻿
Posted by Buttercup at 10:35 PM

wonderful memories of your folks. i'm glad to hear you survived the Nor'easter unscathed.

Carol, I love the stories of your parents. They were wonderful and loving. Please be safe when going out. I am praying for both coast of this country. Especially the east coast...so much devastation already. Blessings to all, xoxo, Susie

What a wonderful remembrance of those special two people of your life!
And, yes, what a tribute to them that all those guests made it! Quite the troopers they were in all their finery!!
Also, what a wonderful photo. I don’t think or know if such a group shot was the norm for weddings at that time but it’s great to have that photographic reminder of everyone who attended!!!

Wonderful memories - happy 71st to them.

I love seeing the old photos! I hope the weather improves soon...I would hate going out in the WIND! Stay safe and warm. Hugs!

Such an honor ... being so loved that family and friends chose to make that excursion. Not sure why, but the term "genteel" comes to mind.

Love that your dad's happiest birthday observance was wedding your mom. How very proud you must feel, Carol. And blessed.