A is for A Cafe

I'm beginning the Blogging from A to Z Challenge with A Café. No, this isn't a take-off on Abbott and Costello's "Who's on First," but the name of our first coffee tasting site is a.café, on West 58th Street. Though it's only a block from my dentist, I don't generally wander into this area. It's off Fifth Avenue and a relatively pricy part of Manhattan. I passed it after walking on Fifth Avenue on Easter. The name and the extensive coffee menu made it my place to begin my best coffee search. 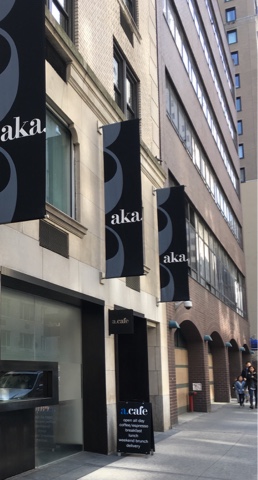 It is part of a small chain, with branches in several American cities and London. I generally won't be including national and international chains in these posts, but I am making an exception here. It didn't feel like a chain and the quality of the coffee,  Counter Culture Coffee, is extremely high. ﻿ 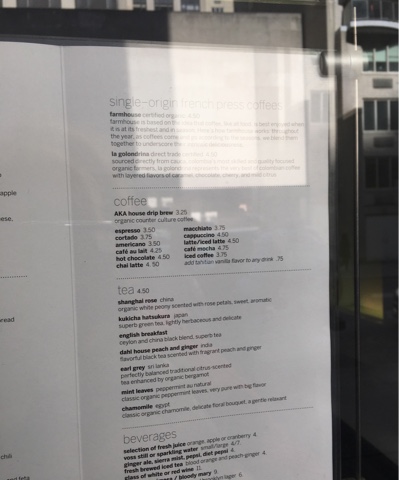 The coffee descriptions drew me in off the sidewalk.  ﻿

As I initially wrote this is not a scientific taste test. The temperature won't be measured and I won't even be ordering the exact same type of coffee at each site. Generally I will be ordering iced coffee light -- my favorite -- but I may order a cup of hot coffee or if I'm in the mood, a cappuccino. I also won't be displaying pictures of all my coffee orders or many of them. Iced coffee pretty much looks like iced coffee just about everywhere it's served. It's not about how the coffee looks, it's about how the coffee tastes.
Which brings us to my coffee grading system. Don't expect any low grades. If it's below a C (probably a C+) it's not going to be part of the series. I'm looking for good coffee experiences, and if I don't enjoy it, it's unlikely I will write about it. However, unless I'm thrilled, I will not be giving out an A very often, if at all. I hope to encounter some A iced coffee, but that remains to be seen, or tasted.
A.cafe -- based on its location -- was slightly more expensive than my usual iced coffee and as a result I wanted to love it. After my first sip my opinion was that it was good, a solid B. But as the ice melted and the coffee got colder, my opinion changed. I had at least a B+ glass of iced coffee. I'm going to be on the lookout for Counter Culture Coffee and I will be looking to try it again.
I did have an excellent breakfast burrito with my coffee, but food -- especially bread and pastries -- will not be part of the grading. I am concerned about gaining weight just looking at some of the baked goods that are featured in a few of the places I've already visited.
I've got two goodies for "B" for tomorrow and I will be sampling "C," tomorrow afternoon, which is alleged to be the best coffee in New York City.
As ever thanks for visiting and take good care.

You picked a brilliant subject for your a-z posts. I hope you do not suffer too much drinking all that coffee in your quest (Ha Ha). Coffee, yum. And mostly non-chain or independent places, good idea.

Sounds like you found a good iced coffee for your first post. I am becoming a connoisseur of iced coffee myself. I used to only drink it black but over the years, sampling different coffees, have learned to like iced coffee! Off to a great start

A good cup of coffee is sometimes hard to find. There are so many different varieties and I've tried several. Most of my sampling is done at home. We don't have the shops available like you do there.

I love your theme and the fact that I can read about coffee while sipping on my morning cup of joe!

Hi Carol, I'm visiting from the A to Z Challenge!

I'm so jealous! All those coffee places! The only coffee place for miles around here is the local country store and well...it's not bad, but it's not 'gourmet' either. *sigh*...That reminds me, my coffee mug is currently empty. Luckily there's some fresh brewed right in my kitchen. BBL. *lol*

LuAnn (approx #369 on the list) @ Back Porchervations.
(and one of co-host AJ Lauer's #wHooligans)

Love a good cup of hot coffee, I savor it and remember enjoying it.

I rarely drink coffee away from home unless I am traveling. The difference in taste of all of those pod coffees is amazing. Some I just cannot drink. Looking forward to your comments.

Hi Buttercup - All I can say is I will be delighted to join you for your coffee each day, hopefully, it will help me get through my own A-Z challenge! Fancy you being an iced coffee drinker I would not have guessed :) Does that mean the sun is shining with you too ... silly me of course it is :)
Wren x

Enjoyed your post, I am not a coffee drinker, but really like the coffeehouse/coffeeshop atmosphere. Makes me want to visit one today.

Although I do not drink coffee, I love to go into coffe shops for the aroma and to get a cup of tea. This is such a great theme for the challenge and one that may be helpful to those traveling to NY.

Buttercup, I wish I were testing coffees with you. I think coffee should make you want a cup as soon as you smell it. Blessings, xoxo, Susie

I'm not a coffee drinker so I don't know if a B for coffee is a good thing. I'm going to guess yes, but maybe coffee people grade differently because we are talking coffee! LOL

Oh how fun! Talk and photos of coffee and New York. I am definitely looking forward to following along this month. Happy coffee testing!
~VanillaBean at Travelling Spoons

Sounds like an honest assessment. This challenge should prove interesting as you move it along.

It's going to be fun to follow this...all the way from A to Z.

I love fresh baked bread and would have trouble deciding what to get! I wish we had a better bakery here...I think! I don't need the extra calories either but I love bread better than dessert! Hugs!

Nicely done. It's an interesting topic to cover and will make for some great visuals and hopefully great coffee.

Looking forward to your taste tests. I drink about a pot of coffee every day but am not a connoisseur.

Interesting A to Z choice! I love iced coffee and my pet peeve is not having enough ice to make it cold - lukewarm iced coffee turns me off. I often will ask for s small cup of ice do I can add more after a few sips. Next time I'm in Manhatten I'll have to search out a few. I stopped in in my road trip. My blog A to Z was in southern food and memories.
https://everyonehasafamilystorytotell.wordpress.com/category/2016-blogging-from-a-to-z-challenge/