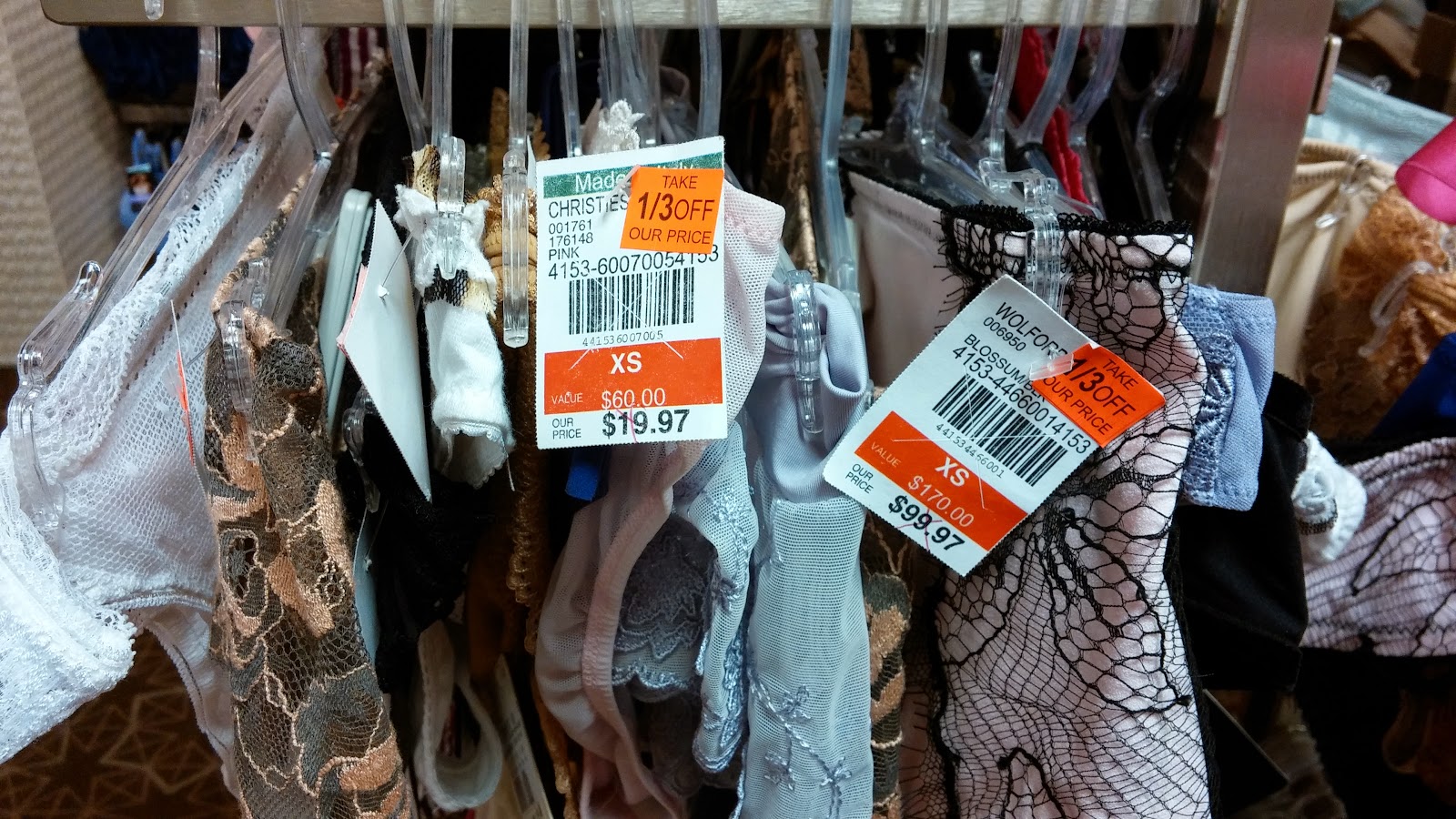 There I was at my favorite discount store, Century 21, stalking the $12.99 bras, when I brushed past this rack of mark downs. I was initially intrigued -- I can always can use a few new pairs of underwear -- but then amazed and horrified at the prices. Amazed...I was more amazed at the original retail price of $170.00, but since I have been a discount shopper for longer than I haven't, the thought of paying retail for underwear is not in my consciousness. And the thought of paying $99.97 or even $59.97 is also not in my consciousness.

I did find my $12.99 treasure and though some might argue it's LAST SEASON, I would respond with WHO CARES! Almost everything I own is last season and in some cases the first season was during a time when someone named either Bill or George was President, which gives us quite a long time frame. I also realized that this ultra-expensive underwear may also be last season and that would be an expensive fashion faux pas. In years past I actually cared about this season and last season, but I'm happy to say that's one issue that doesn't bother me much anymore.

On a different note, in any season, visitors to New York take note of Century 21, or just Century, as it's referred to by those in the know. Whether you're looking for designer dresses or bathrobes with snaps, it's a terrific place to shop. There's also a great, great shoe department.

Today was the first day with a slight snap of autumn in the air. It may be warm again, but it was a day for jeans and shoes and socks and I am happily typing away without the purr of the air conditioner in the background. I went wild and treated myself to one of my all-time favorite snacks, the pumpkin muffin, and it was as good as I remembered.

Sneak peek of the day ahead in this blogging mini-marathon...We're stopping at Trinity Church in Lower Manhattan. Hope you will join us.

As always, thanks for visiting and take very good care.

NB: Yes, if you think the title is familiar, it's a paraphrase of Bob Dylan's "Stuck Inside of Mobile with the Memphis Blues Again." I'd been testing out a lot of titles and this one came to me on a subway ride this afternoon.
Posted by Buttercup at 10:32 PM

Wow... I can't imagine spending so much on a pair of knickers! That is far from my price range to say the least. I really don't mind buying clothes out of season. I now care more about what style I like and a lot less about what's in fashion. Strange how things change with age :)
Take Care!

We are constantly shocked by the price of things! These days I shop for comfortable and cheap!!!
That underwear is outrageous.
I am envious of your cooler temps. Have a great day.

Good grief! At those prices, I imagine there are a lot of folks that are going "commando"!

I have been upset by the prices of butter lately. Just one little pound of butter is $4.00 here!

With the prices of clothes, and the prices of groceries, we're going to see a lot of thin, half dressed people.... not just in Hollywood... ***giggle**!

What?! I've never seen such a price on undies! Not for me! I'm a big discount shopper, too!

Have a wonderful Wednesday!

Wow and to think I thought two pairs for $25 was expensive.

Price tags never cease to amaze me. I am a sale shopper too and have resolved to never pay full price. I wear a lot of last seasons clothing too. From what I see on the streets these day...anything goes, so I never feel out of style. Hope you enjoy your Wednesday!

I would love to shop there and look through those racks for a bargain. I've never cared about the newest for the season...just a bargain! lol Enjoy your day! Hugs!

There are seasons to underwear? Wow learn something new each day I guess.

I'm guessing these aren't actual, "underwear" but more like foundations garments or fancy nighties but still that is pretty expensive prices.

Wow, these MUST really good
underwear!
Last season, this season who cares!
What is old is new, vintage, retro
or whatever the term is now.
Let's face it, we'd all be broke if only we wore this sessons clothes!

One has to wonder why anyone would pay that for a pair of underwear! If I were a rich person and could afford to do so, I still wouldn't. It just seems wrong, especially when there are so many hungry people in this world. If I had that kind of money, I'd be donating it to help those in need. I'm patiently waiting for a little fall in the air here, but no such luck! Hopefully soon...:)

OK, I'm in sticker shock! Hopelessly naïve, but I never paused to consider there was a season for what momma used to call, 'unmentionables'! (Mine are so unremarkable, they define the word unmentionable!)

BTW, I like the play on Dylan. Your titles have always been fun, Carol!

Some things just defy understanding. Me? I get mine from the bargain bin.